Catalonia has dominated international headlines in recent weeks in the wake of a banned referendum on splitting away from Spain.

Yet, the region in the northeast of Spain, which has its own language and distinct customs, has a long history of striving for independence.

One of Spain’s wealthiest region, Catalonia today accounts for 15 percent of Spain’s population and 20 percent of its economic output. Historical disputes and financial grievances have strengthened the cause of independence, yet its 7.5 million people appear to be deeply divided over the issue.

A defined region of Catalonia was first referenced in the 12th century. The region has been part of Spain since its unification in the 15th century, following the marriage of Ferdinand I of Aragon and Queen Isabella of Castile.

Despite always simmering under the surface, Catalonia’s independent spirit did not show up in a prominent way until the 17th century, when the Catalans revolted against the taxation imposed by Philip IV of Spain.

In the decades that followed, Catalonia backed the eventual loser in the War of the Spanish Succession (1701-1714), Archduke Archduke Charles of Austria. When Philip V won the war, the Catalans were zeroed out and their semi-independence and separate parliament were suppressed by the new king.

In the early 19th century, the Catalan feeling of independence emerged again, leading to a revived effort for political autonomy.

In 1931, Spain’s form of government changed from a monarchy to a republic. Catalonia became semi-autonomous and the national Catalan government, the Generalitat, was reinstated.

However, during the Spanish Civil War (1936-1939) the Catalans fought for the losing Republican side. After the war ended, General Francisco Franco and his Nationalist movement suppressed any form of Catalan identity – the Catalan language, customs and autonomy were all repressed until Franco’s death in 1975.

The new Spanish government granted Catalonia partial autonomy in 1977. Two years later, in 1979, the region was given full autonomy.

In 2006, a reformed version of 1979’s statute of autonomy came into force. The new version gave the Catalan regional government more power, specifically on tax and finance matters.

However, in 2010, Spain’s constitutional court struck down the statute’s reformed version, leading to a resurgence in Catalan nationalism.

The court’s ruling took place during the height of a major eurozone economic crisis, which had hit Spain particularly hard.

As an economic heavyweight for Spain, Catalonia’s calls for independence grew louder compared with the previous decades.

With Barcelona, a major tourist destination, as its capital and popular beach resorts on its coastlines, Catalonia accounts for about a fifth of Spain’s total GDP.

In the following years, just as the Spanish economy recovered slowly, the Catalan nationalist movement kept gaining momentum. This paved the way in 2013 to a declaration of sovereignty, which was a precursor for a non-binding, highly contested referendum on independence in 2014.

Although Spanish authorities fought the referendum in court, pro-independence campaigners staged a symbolic ballot, organised by volunteers rather than government officials to get around court restrictions.

In the end, more than 80 percent of those who cast their ballots backed a split from Madrid, leading to snap elections in Catalonia.

In late 2015, the new Catalan government, encouraged by the election result, approved a measure for “peaceful disconnection from the Spanish state”, a decision that was again contested by Madrid. The Constitutional Court in Madrid ruled that Catalonia’s move was illegal.

In March 2017, former Catalan leader Artur Mas was barred from public office for two years by a court in Madrid for his prominent role in the 2014 referendum.

But it was that vote that eventually led to the new referendum on splitting from Spain on October 1, 2017.

After weeks of increasing political uncertainty, the Catalan regional parliament on October 27 unilaterally declared independence from Spain after a secret vote.

This move angered Madrid, leading Spanish authorities to trigger Article 155 of the 1978 Constitution and assume direct control of the northeastern region.

Catalonia’s leaders were sacked and a snap regional poll was announced for December 21. 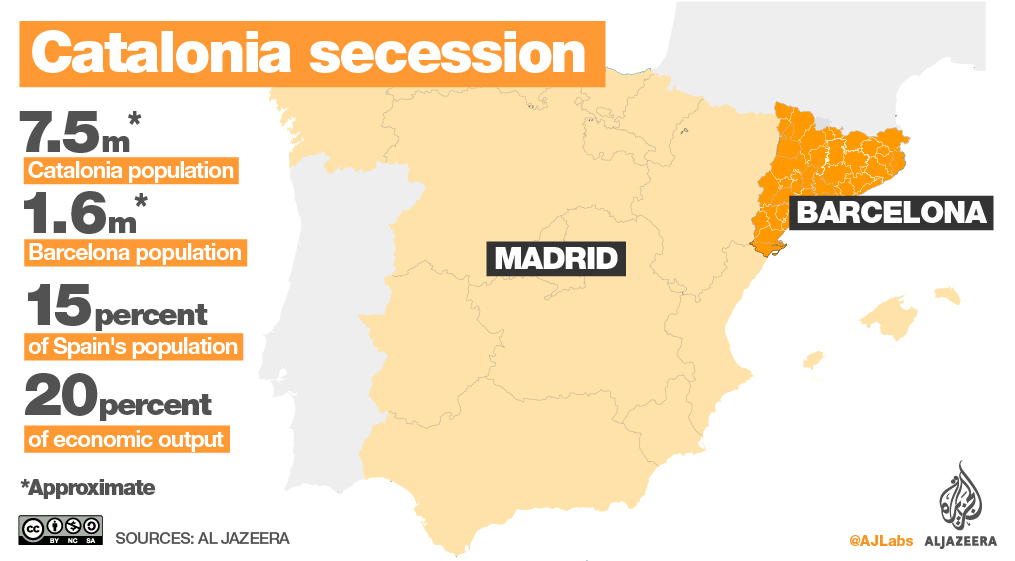