The US government says a man linked to a deadly attack on a US diplomatic compound in the Libyan city of Benghazi five years ago has been captured.

Mustafa al-Imam, who was captured in Libya on Sunday, “will face justice in the United States”, US President Donald Trump said in a statement on Monday.

The September 2012 attack on the US consulate in Libya’s second-largest city resulted in the deaths of Ambassador Christopher Stevens and three other US citizens.

“Our memory is deep, and our reach is long, and we will not rest in our efforts to find and bring the perpetrators of the heinous attacks in Benghazi to justice,” said Trump.

Upon arrival to the US, al-Imam will be presented before a federal judge in Washington, DC, according to the justice department.

He faces three crimes charges that were filed on May 19, 2015, and were recently unsealed: killing or conspiring to kill a person during an attack on a federal facility, providing material support for “terrorists”, and using a firearm in connection with a violent crime.

Al-Imam is “approximately 46 years old”, according to US authorities.

The attack on the US consulate came on the 11th anniversary of the September 11, 2001, al-Qaeda attacks in the US.

Stevens, a career diplomat, had taken his post as ambassador in May 2012.

Based in the capital, Tripoli, he was paying a short visit to Benghazi when the consulate came under attack.

Then-US President Barack Obama and his Secretary of State Hillary Clinton came under heavy criticism from Republicans, who accused them of failing to implement adequate security for the US citizens.

During the 2016 presidential campaign, Trump, a Republican candidate, also raised the issue of the Benghazi attack against Clinton, his Democratic rival.

On Monday, Trump addressed the families of those who were killed saying, “they will never be forgotten”, while vowing to find and prosecute the other suspects.

Earlier this month, a US court opened the trial of Ahmed Abu Khatallah, another suspect in the 2012 attack. Khatallah was captured in 2013 and had been awaiting trial since 2014.

Meanwhile, Trump called on the rival governments of Libya to form a “unified government and military”.

“We encourage all Libyans to support the ongoing reconciliation process facilitated by the United Nations and to work together to build a peaceful and stable country.” 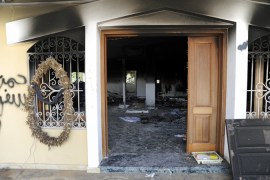 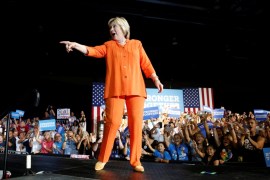 Parents of two Americans killed in Libya in 2012 file lawsuit against the Democratic presidential nominee. 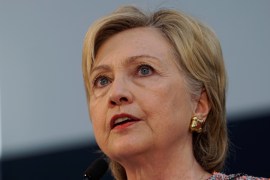 Benghazi report: No new sign of wrongdoing by Clinton

Congressional report blames government failings for deaths of US ambassador and three others in Libya four years ago.