Maza said the charges will include sedition and rebellion, both felony offences with penalties of between one and 30 years in prison.

The attorney general said the charges will be filed against dismissed Catalan President Carles Puigdemont, Vice-President Oriol Junqueras and others who “have produced an institutional crisis that ended the unilateral declaration of independence with total disregard of our Constitution last October 27”.

The complaint consists of 118 pages and asks that the accused be summoned as a precautionary measure, “taking into account the seriousness of the facts and of the crimes imputed.”

Later on Monday, Catalan daily La Vanguardia reported that Puigdemont had travelled to Belgium. The report came a day after Theo Francken, Belgium’s migration minister, told local media that it would be “not unrealistic” for his country to offer Puigdemont political asylum if he asked for it.

The Catalan parliament voted to declare independence on Friday after an extended period of proposed negotiations between Madrid and Barcelona.

No direct talks are known to have taken place.

The Spanish government subsequently chose to enact Article 155 of the Constitution, which allows for control of the regional government.

The regional government, including ministers and high-ranking officials, were dismissed on Saturday after Article 155 came into effect.

Rajoy has called for elections on December 21.

Sergi Sabria, a parliamentarian from the Catalan Republican Left party (ERC), to which dismissed Vice-President Junqueras also belongs, said he does not view the elections as legitimate, but still plans to participate.

“The December 21 elections have to be another opportunity to consolidate the republic. We do not have to waste any opportunities,” Sabria told a press conference after a meeting of the ERC.

Puigdemont has yet to be seen publicly in Barcelona, though Junqueras was present at the ERC meeting on Monday morning. 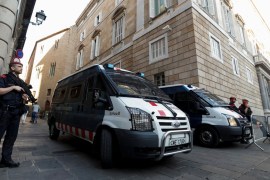 Ministers and officials given ‘a few hours’ to take possessions from their former offices, as Madrid takes power. 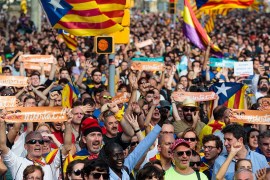