The Palestinian presidency has refuted a report quoting Israeli politicians as saying that Mahmoud Abbas told them he would not appoint Hamas figures to his cabinet if they did not publicly recognise Israel.

Abbas’ alleged comments were made in a meeting with 12 ex-Israeli members of parliament who visited him on Sunday in the occupied West Bank city of Ramallah, the Israeli daily Haaretz said in an article published on Monday.

In response, Abbas’ Fatah party later in the day issued a short statement on its social media platforms, which noted: “The presidency denies the remarks attributed to the president by ‘Haaretz'”.

The statement by Fatah also pointed to reporting by al-Mayadeen news channel, which quoted sources in the Palestinian presidency as saying that Abbas assured the delegation that “the Palestinian government is abiding by international agreements”.

The developments come after Hamas and Fatah signed a breakthrough reconciliation agreement in the Egyptian capital Cairo earlier this month, following a decade of division between the two political parties.

Hamas has been the de-facto ruler in the Gaza Strip since 2007 after defeating Abbas’ long-dominant Fatah party in parliamentary elections.

When Fatah refused to recognise the vote, Hamas took control of the Gaza Strip in an armed conflict, after which Israel imposed an airtight siege on the territory.

The two groups have governed the occupied Palestinian territories of the West Bank and the Gaza Strip respectively ever since.

The Cairo agreement is meant to usher in a new reality of Palestinian unity based on a power-sharing government.

But fundamental differences in ideology and practices – such as Hamas’ policy of using armed resistance and choosing not to recognise Israel, compared with Fatah, which cooperates with the Israeli occupation – are some of the key obstacles that could undermine the planned unity, as has occurred in the past.

Israeli Prime Minister Benjamin Netanyahu has said that his government would refuse any diplomatic talks with the unity government if Hamas had any role in it.

The United States also chimed in earlier this month, demanding that Hamas disarm if it wants any role in a unity government.

But Fatah spokesman Osama Qawasmeh told Al Jazeera that the agreement is an “internal Palestinian matter” that will help bring peace.

“The deal that we signed with Hamas talks about building a Palestinian state on the June 4, 1967, borders – which is in line with international law,” Qawasmeh said when asked the comments made by Jason Greenblatt, the US president’s special representative for international negotiations.

“Israel is trying through its allies to pressure the Palestinian leadership. We declare that our decision is a Palestinian, independent, national decision, and we will not go back to division,” he added. 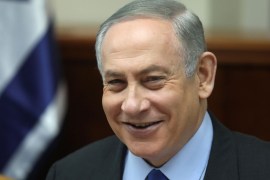 The Saudis publicly adopted Israel’s definition of Hamas as a “terror organisation” rather than a resistance movement. 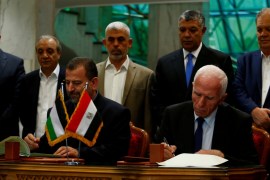