The king of Bahrain has said his country will not take part in any summit or meeting attended by Qatar unless Doha “corrects its approach”, as a major diplomatic crisis in the Gulf nears its five-month mark.

Bahrain, along with Saudi Arabia, the United Arab Emirates and Egypt, cut ties with Qatar on June 5 and imposed a land, sea and air embargo, accusing it of supporting “terrorism”. Doha has repeatedly denied the allegation.

Bahraini King Hamad bin Isa Al Khalifa on Monday said that Qatar had shown that it did not respect the treaties and charters that the Gulf Corporation Council (GCC) was founded upon, according to BNA, the kingdom’s official news agency.

“As long as Qatar continues this approach, the Kingdom of Bahrain cannot participate in any GCC Summit or meeting attended by Qatar unless it corrects its approach, comes to its senses, and responds to the demands of the countries that suffered so much from its policies,” he said during his weekly cabinet meeting in the capital, Manama.

There was no immediate response from Qatar.

A GCC summit is scheduled to take place in December in Kuwait, which is also leading mediation efforts to defuse the Gulf diplomatic crisis.

The GCC is a political and economic alliance of six countries in the Arabian Peninsula: Bahrain, Qatar, Kuwait, Oman, Qatar, Saudi Arabia and the UAE.

According to BNA, the Bahraini king also said it was time to take firmer action against those “resorting to foreign sides to threaten brotherly countries and put their safety at risk”.

His comments came a day after the Bahraini Foreign Minister Khalid al-Khalifa called for the suspension of Qatar’s membership from the GCC until it responds to the demands of the four blockading countries.

Separately on Monday, the Bahraini king also issued a directive to impose visas on Qatari nationals planning to visit the island kingdom.

The new visa policy will only apply to Qataris and not to citizens of the other GCC countries, who will continue to be able to enter Bahrain by showing their identity cards.

The king said the measure is part of Bahrain’s efforts “to preserve the security and the safety of the kingdom”, according to BNA.

The move came a day after a US news broadcaster aired an interview with the emir of Qatar, Sheikh Tamim bin Hamad Al Thani, in which he stressed he will not bow to pressure from the blockading countries.

“Our sovereignty is a red line. We don’t accept anybody interfering our sovereignty,” Sheikh Tamim told CBS’ 60 Minutes.

The Qatari emir said his country’s policies are seen as a threat by the blockading states.

“They don’t like our independence, the way how we are thinking, our vision for the region,” said Sheikh Tamim. “We want freedom of speech for the people of the region. And they’re not happy with that.” 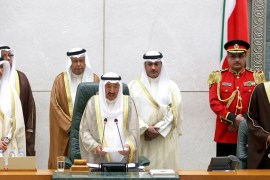 Sheikh Sabah cautions that the Gulf Cooperation Council may crumble if the dispute with Qatar is not resolved.