On October 31, Australia’s offshore immigration detention camp on Manus Island will shut down.

The controversial Papua New Guinea-based centre, dubbed “Australia’s Guantanamo” by people living there, is currently home to about 600 refugees.

Once closed, the detainees will be forced to move elsewhere – either to a different part of Papua New Guinea (PNG) or a different country.

However, despite the centre’s notoriety, its closure has led to criticism from both people within the camp and outside.

What is the Manus detention centre?

The Manus Regional Processing Centre is located on the small island of Manus, about 300km of the coast of the main island of Papua New Guinea. It is run by the Australian government in order to keep refugees out of Australia. People using boats to get to Australia’s shores are stopped by the coastguard and subsequently sent to one of several detention centres, including in Manus.

The facility on Manus was established in 2001, together with a detention camp on Nauru. While the Nauru centre houses single women and families, including fathers, the Manus one holds only single men.

Both camps gradually fell into disuse and were eventually closed in 2008. But they reopened four years later, following a large increase in the number of refugees trying to reach Australia.

Australia, PNG and Nauru struck a deal under which the latter two would take in refugees from intercepted boats in exchange for money.

For the Manus Island camp, the plan was to subsequently house the refugees in PNG if their asylum claim was proven valid. If not, then the refugees would either be sent back to their country of origin; or to a different country; or remain in detention indefinitely.

The camp is run by Broadspectrum, an Australian company also managing the offshore detention centre on Nauru.

Christmas Island, which is an Australian territory, hosts a third detention centre. 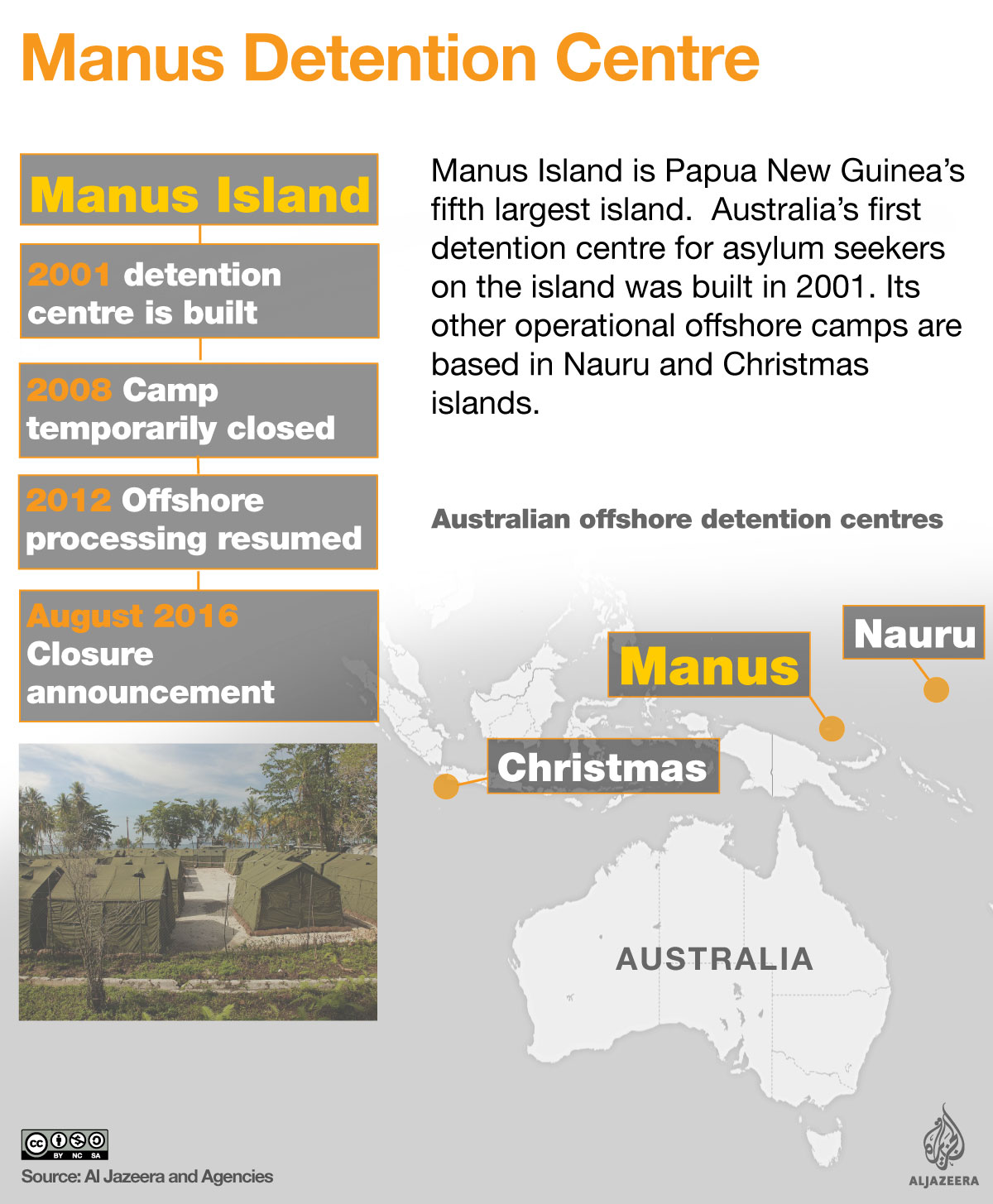 What are the conditions in the detention centre?

The Manus camp has been widely criticised since its 2012 reopening – just like Nauru. The United Nations and human rights groups have described conditions in the centres as horrid, saying that refugees living there are subject to “severe abuse and neglect”.

Since January 2014, there have been nine people held at the camps on the islands of Manus, Nauru and Christmas have died, according to Border Crossing Observatory, a Monash University-based research centre.

Four committed suicide, while the rest of the deaths include one case of suspected suicide, one death as a result of violence and three cases of accidents/illnesses.

In April 2017, there was a shooting when supposedly drunken PNG soldiers shot at refugees held at the centre. Nine people were wounded in the shooting that allegedly started after a conflict between detainees and guards got out of hand.

In June 2017, the Australian government also agreed to pay 70 million Australian dollars ($53m) to more than 1,900 asylum seekers who sued over their treatment at the Manus camp.

The men filed legal claims against the Australian government and two contractors who ran the camp between early 2012 and late 2014 over alleged physical and psychological injury they said they suffered, as well as for false imprisonment. One of these contractors, Broadspectrum, is still in charge of the Manus and Nauru detention centres.

As of October 2017, just over 600 men live in the Manus detention centre. They are not allowed to leave the camp to move around the island freely. Instead, they can only leave the camp on planned day trips.

Ultimately, the goal of the 2012 deal is to resettle those who are granted asylum in PNG. However, many of those held have refused to leave the camp and go to temporary transit centres out of fear the local population will attack them.

In a recent statement, the refugees said they are not planning to leave the Manus centre even after it closes.

The UN has warned of a “humanitarian crisis” amid fears Australia would walk away completely from any involvement with refugees on the tiny Pacific Island.

Why is Manus camp being closed?

In April 2016, the PNG’s Supreme Court ruled that the detention of refugees on Manus was illegal and in breach of fundamental human rights.

Some five months later, the governments of PNG and Australia presented plans for the closure of the camp, without offering an exact timeframe.

Earlier this year, parts of the camp were shut down in preparation for its final closure. Several compounds were demolished in advance of the planned shutting down, and refugees were told they had to prepare to be relocated in the PNG community, after transiting through the East Lorengau centre in PNG.

However, this would cover only those who were granted asylum, while no refugees would be resettled in Australia at any time.

Australia has said it will fund the operation of three new transit centres on Manus for detainees.

What will happen to the people living there?

After the camp’s closure, the fate of the 600 people living there will depend on the status of their individual claim to asylum.

If a refugee’s claim is seen as valid, he will first be moved from Manus island to a transit camp near the town of Lorengau, where they allegedly would be prepared to move into the PNG community.

However, many refugees living in the camp have expressed fear for their safety if they have to move to Lorengau.

There have been several incidents during which refugees who were granted asylum were injured or mistreated in other ways by the local PNG population, according to human rights organisations. As a result, so most of them moved back to the Manus detention centre because they could not integrate in the PNG community.

For refugees whose claims are not seen as valid, the future appears even bleaker. If it is not safe for them to be repatriated, they will be resettled to a different country than Australia and PNG, or be held in detention indefinitely in one of the offshore camps where they often have already spent years of their lives.

One of the countries involved in the resettling of the refugees is the US, which struck a deal with Australia during the Obama administration to house an unspecified number refugees out of the 1,600 held in Australian offshore detention centres on the islands of Nauru and PNG.

However, the election of Donald Trump cast doubt over the agreement’s future after the US president called it “the worst deal ever”. Despite the criticism, the US has started resettling refugees from Manus.

So far, only 54 refugees have departed for the US.

As of now, it is unclear what the reaction of the PNG government will be if the people living in the Manus detention centre refuse to move to different locations after the camp’s closure,

Since the people living in the centre will have no access to food, water or electricity and they refuse to leave, there is a risk the standoff will escalate into violence.