The KDP is one of the two dominant parties in the northern Kurdish region.

Following the removal of Saddam Hussein, Iraq’s former president, in the 2003 US-led invasion of Iraq, Barzani was appointed to the interim Iraqi Governing Council, where he became an important player in achieving official recognition for the Kurdish region and its local government.

As the president of the Kurdistan Regional Government (KRG), a post he assumed in 2015, Barzani was one of the leading figures behind a September 25, 2017, vote on secession from Iraq.

However, after an overwhelming victory in the non-binding referendum, relations quickly worsened between the KRG on the one hand and the Iraqi federal government, Turkey and Iran on the other hand.

Barzani asked on October 29 the Kurdistan regional parliament not to renew his term as president after its expiration on November 1. The parliament approved his request in a closed session.

The son of Mustafa Barzani, a Kurdish nationalist hero, Barzani is often seen in traditional Kurdish dress and turban.

Born in 1946, in Mahabad, Iran, he took control of the KDP after his father’s death to continue battling the Iraqi government.

He escaped an assassination attempt in 1979, while he was on a trip to Austria’s capital, Vienna.

In the aftermath of the 1991 Gulf war, when a US-led Western alliance fought Saddam over his invasion of Kuwait, Kurdish fighters, encouraged by the West, battled Baghdad.

Although the West refused to intervene when Saddam crushed the Kurdish uprising, it later declared Iraq’s Kurdish region a safe area and a “no-fly” zone above the 36th parallel.

The move saw the erosion of the central government’s powers from northern Iraq, prompting Barzani to evolve from Peshmerga fighter to political leader.

The KDP banded together with the rival Patriotic Union of Kurdistan (PUK), led by Jalal Talabani, to run the region. Talabani passed away on October, 3 2017, at the age of 84.

But in 1994, the region dissolved into a four-year civil war between the two groups.

In 1996, while Talabani turned to Iran for help, Barzani called on Saddam to send troops and help him capture Erbil from the PUK.

Though the KDP and the PUK have since joined forces to dominate the region, signing a peace agreement in the US in 1998, rivalry between the supporters of Barzani and Talabani apparently persists.

Nevertheless, the KDP and PUK have run in national elections as a unified Kurdish Alliance (KA). In 2005, they won 53 seats to be the second largest bloc after the Shia-dominated United Iraqi Alliance in the Iraqi parliament.

In 2010, Barzani’s KDP joined the PUK as part of an alliance for the parliamentary election.

Following the defeat of the Iraqi army at hands of the Islamic State of Iraq and the Levant (ISIL) group in Iraq, Barzani was one of the people who led the Kurdish armed forces to fill the power gap left behind.

The Kurdish forces, better known as the Peshmerga, whose name translates to  “those who are ready to face death”, and trained by US and other Western troops, proved to be formidable foes and paved the way for the defeat of ISIL, also known as ISIS.

Barzani was nominated in 2014 by TIME Magazine as one of the “People of the Year”, citing his continued struggle for independence and his leadership in the fight against ISIL.

In 2016, Barzani said: “The day we have an independent Kurdistan, I will cease to be the president of that Kurdistan.”

A year later, in 2017, following the defeat of ISIL in Mosul, Iraq’s second largest city, Iraqi Kurds made a push for complete independence.

A non-binding referendum was held about secession from Baghdad. Along with Iraq’s central government, Turkey, the US, Iran and the UN all spoke out against the poll, saying it would only distract from the ongoing fight against ISIL and further destabilise the region.

About 93 percent of the people who voted were in favour of Kurdish secession.

Several weeks after the referendum, with pressure mounting on him to resign, Barzani announced he would end his presidency, a post he had held for 12 years.

His tenure had officially expired in August 2015. 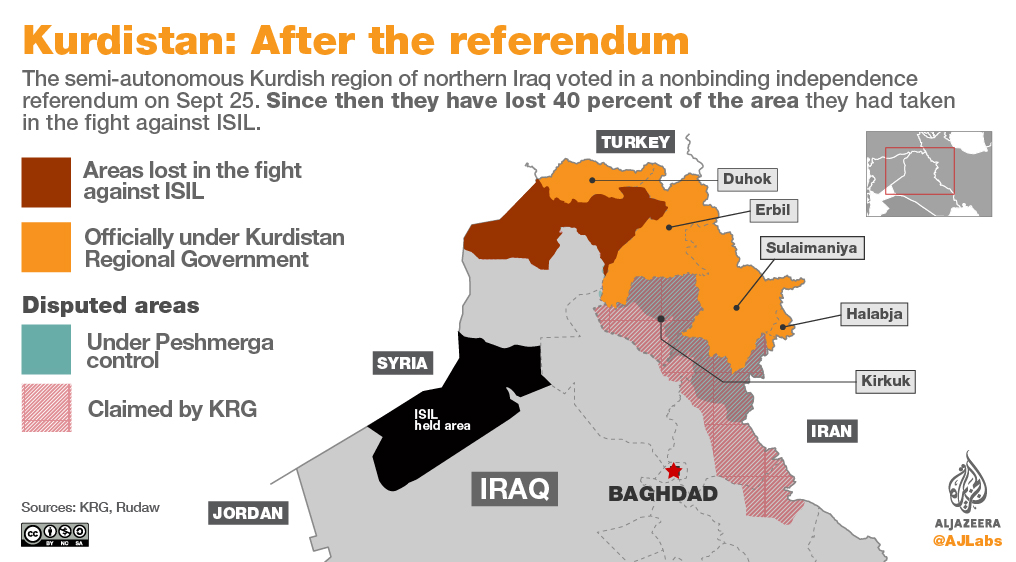