Johannesburg, South Africa – A large carnivorous dinosaur once walked across southern Africa some 200 million years ago, a team of researchers has concluded after discovering a large footprint in Lesotho.

The dinosaur, named Kayentapus ambrokholohali, was 2.7-metres high and nine-metres long making it one of the largest dinosaurs to ever roam the continent, researchers said in the Plos One Journal published earlier this week.

Lara Sciscio, a postdoctoral research fellow in Geological Sciences at the University of Cape Town, and lead writer of the journal article, described the finding as “unprecedented” and “unexpected”.

“This discovery means that there are only two sites in the world where such large carnivorous dinosaurs were found as far back as 200 million years ago – Poland and now Lesotho,” Sciciso told Al Jazeera from Cape Town.

Fabien Knoll, a senior research fellow at The School of Earth and Environmental Science at the University of Oxford, and one of the members of the UCT-led team, said the discovery was a departure from established understanding of the types of dinosaurs that existed during the early Jurassic period 200 million years ago.

Until this discovery, theropods – or large carnivorous two-legged dinosaurs – were thought to be considerably smaller during the Early Jurassic. They were roughly three to five metres in body length whereas this dinosaur would have been nine-metres long.

It is only during the Cretaceous, considerably more recent at 145 million years ago, that larger theropods, such as the more widely known Tyrannosaurus rex, are represented in fossil records.

“This is an important discovery because the footprints found were the biggest of their epoch [Early Jurassic] in the whole of Gondwana [the prehistoric continent that later broke up to become Africa and other continents],” Knoll told Al Jazeera.

Knoll said the footprint shows that the dinosaur was two metres longer than the Cryolophosaurus, which is itself the largest Early Jurassic theropod known from skeletal remains.

Researchers found the footprint during a field trip in the Roma Valley near the National University of Lesotho in early 2016. They returned through the year to conduct tests and establish the date of the fossil footprint, which culminated in the report published in Plos One Journal.

The study, led by University of Cape Town researchers, said the creature “would have roamed a landscape otherwise dominated by much smaller carnivorous dinosaurs and a variety of herbivorous and omnivorous dinosaurs”.
Sciscio said the finding alludes to a deeper, more complicated history of the planet.

“It also showcases how old the world is and also helps us understand a little more about our history,” she said.

The above image was adapted by Lara Sciscio, with permission, from an illustration by Scott Hartman 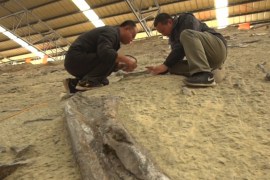 Fossil hunters launch the equivalent of a gold rush as resources for proper excavation become available in Asian nation. 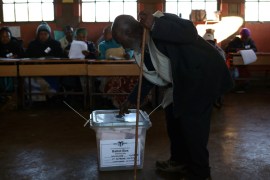 Thabane takes office as part of a coalition three years after an attempted coup and two days after his wife’s murder.