President Donald Trump released nearly 3,000 previously secret documents on the 1963 assassination of John F Kennedy, but hundreds were held back despite a law ordering they be made public.

Kennedy was shot in Dallas, Texas on November 23, 1963, allegedly by a lone gunman, Lee Harvey Oswald. However, ever since the killing of the American president, conspiracy theories have swirled that others may have been involved, including the CIA, military officials and mafia figures.

After the controversial 1991 film, JFK, by Oliver Stone, the government a year later ordered all files relating to the assassination be released by the end of October 2017.

“The American public expects – and deserves – its government to provide as much access as possible to the President John F Kennedy assassination records so that the people may finally be fully informed about all aspects of this pivotal event,” Trump said in a statement on Thursday.

“Therefore, I am ordering today that the veil finally be lifted.”

Trump said, however, some US agencies had requested that some documents remain secret “because of national security, law enforcement, and foreign affairs concerns”. Those files will be reviewed, and information that allegedly affects national security blacked out before release.

“I have no choice today but to accept those redactions rather than allow potentially irreversible harm to our nation’s security,” he said.

Peter Kuznick, a professor of history at the American University in Washington, DC, noted more than 60 percent of the American public doesn’t believe the official story.

He said the 300 documents being held back would be the most revealing, but added there is still a lot to learn from the classified material that was finally released.

Some of the points raised by the army of critics challenging the official narrative include Oswald’s trip to Mexico City where he went to the Russian embassy and met an intelligence officer. He was also seen publicly with both Cuban pro- and anti-Fidel Castro activists in New Orleans.

One file released on Thursday was on the subject of alleged CIA involvement in Kennedy’s murder. The April 23, 1975 deposition of Richard Helms – the agency’s former deputy director of plans – is cut off and incomplete, however.

Helms was asked by an investigator: “Is there any information involved with the assassination of President Kennedy which in any way shows that Lee Harvey Oswald was in some way a CIA agent …”

The document ends abruptly, and Helms’ response is missing entirely.

Regarding the remaining documents, the National Archives – which oversees the assassination files – said Trump ordered agencies to “only redact information in the rarest of circumstances” where it would cause “identifiable harm of such gravity that it outweighs the public interest in disclosure”.

“These instructions will allow the National Archives to release as much information as possible by the end of the temporary certification period on April 26, 2018,” it said in a statement. 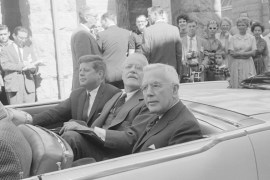 Killing John F Kennedy and the prospect of peace

35th American president was gunned down 53 years ago on Tuesday, ending what some say were plans to finish the Cold War.