Nairobi, Kenya – Polls have closed in a rerun of Kenya’s presidential election that was boycotted by the main opposition leader and marred by clashes between his supporters and security forces.

Voting was postponed in at least four counties due to “security challenges”, the country’s electoral board said on Thursday.

“We have faced and continue to face challenges which are largely security related in certain electoral areas,” Wafula Chebukati, chairman of the Independent Electoral and Boundaries Commission, said.

The four counties were Homa Bay, Kisumu, Migori and Siasa, according to Chebukati.

At least two people were killed in the opposition stronghold of Kisumu and several others wounded as police engaged in running street battles with protesters. One person was also killed in Homa Bay.

In Kibera, a slum in the capital, Nairobi, at least one polling station remained closed most of the day as protesters barricaded roads and security forces fired tear gas and live bullets to disperse them.

The security services rejected claims that they had used excessive force against protesters.

“In every instance which we respond to, our response has always been proportionate and measured,” Joseph Boinnet, the country’s police chief, told reporters.

“Our responsibility is to ensure that those who want to go and vote are afforded sufficient security to go and vote. Those who do not want to vote are also allowed the space to enjoy that right not to vote,” Boinnet added.

In most polling stations in areas where the electoral body postponed the poll, voters did not show up to cast their ballot.

Low voter turnouts were also reported in the coastal city of Mombasa, a stronghold of the NASA opposition coalition.

Kenya is holding the poll rerun after the Supreme Court annulled the August 8 presidential election result due to “illegalities and irregularities” with the voting process.

President Uhuru Kenyatta, who is seeking a second and final five-year term, is expected to win as Raila Odinga, his main challenger in the annulled poll, is not in the running.

“Campaigns are divisive, and it is the responsibility of whoever is elected president to deal with those divisions, to heal and bring the country together,” Kenyatta told reporters after casting his vote in the small farming town of Gatundu in Kiambu county.

“Those who are desirous to vote should be allowed to vote. Those who do not want to vote, it is also their right. But no right supersedes the other,” Kenyatta added.

On Wednesday, Odinga had called on his supporters to stay away from the polling stations.

“Do not participate in any way in the sham election. Convince your friends, neighbours and everyone else to not participate,” Odinga told his supporters at a rally in Nairobi.

Opposition lawmaker Junet Mohamed said elections did not happen in most parts of the country.

“We can confirm that voting did not take place in 85 percent of the polling stations in Nairobi, Coast province, Western province and even in North Eastern,” Mohamed told reporters late on Thursday.

“Even in places perceived to be Jubilee (ruling party) strongholds the turnout was below 30 percent,” Mohamed added.

Polling started at 6am local time (03:00 GMT) and closed at 5pm (14:00 GMT), but several polling stations opened later due to logistical challenges, the electoral body said.

More than 19 million Kenyans are registered to vote in the election rerun. 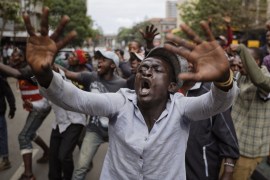 Kenya vote to go ahead after block attempt fails

Political crisis deepens as Supreme Court fails to rule on petition to block election because of shortage of judges. 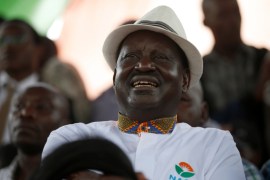 Election board says it cannot guarantee presidential rerun will be free and fair as political parties stage rallies.