Barcelona, Spain – Catalonia’s President Carles Puigdemont has ruled out calling a snap election, as a standoff between Madrid and separatists pushing for the region’s independence intensified.

The Catalan leader on Thursday said he would not dissolve the regional parliament after not receiving enough assurances from the Spanish government that it would not press ahead with a move to impose direct rule over the independence-seeking region.

“I was ready to call an election if guarantees were given,” he told reporters in Catalonia’s capital, Barcelona.

“There is no guarantee that justifies calling an election today,” added Puigdemont.

Puigdemont said it was up to the regional parliament to decide how Catalonia should respond to Madrid’s plans to suspend the region’s autonomy in the wake of an October 1 referendum.

The Spanish senate will vote on Friday on whether to trigger Article 155 of Spain’s constitution, a move that would allow the central government in Madrid to directly administer Catalonia.

The untapped, two-paragraph article allows broad discretion for the administration of regional governments.

The measure requires an absolute majority in order to pass. Spanish Prime Minister Mariano Rajoy heads a minority government and needs the support of the Spanish Socialist Party (PSOE) to enact Article 155.

A PSOE spokesperson had previously said that if Puigdemont called elections, triggering Article 155 would not be necessary.

Earlier, reports had suggested that Puigdemont would announce a snap regional election, in what was seen as a plan to foil Madrid’s plan to take direct control of Catalonia.

The elections were one of three options “on the table” for Puigdemont, according to Carme Forcadell, president of the Catalan Parliament.

Catalans voted in a disputed independence referendum on October 1 that was ruled illegal by the Spanish Constitutional Court and met with police violence, which was condemned by rights groups and European leaders.

Puigdemont announced independence on October 10, but suspended the declaration after eight seconds to encourage dialogue with Madrid.

No dialogue is known to have taken place.

Following Puigdemont’s announcement, Spanish Vice President Soraya Saenz de Santamaria said she regretted that Puigdemont had decided not to go to the Senate “to argue against Article 155”.

She told the parliament must “comply with a legal, democratic and legal obligation. The obligation of any government is to respect and enforce the laws”.

“The political conflict did not begin as a cause of independence but as an exercise of irresponsibility that has been growing,” she told the senate, admonishing the Catalan leader saying “he has not lacked options for dialogue”.

Ahead of Puigdemont’s announcement, hundreds of protesters had gathered outside the Palace of the Government in Barcelona’s Gothic quarter waiting to hear the Catalan leader speak.

They waved the Estelada, the one-starred Catalan flag used to represent an independent Catalan republic, and chanted “Out! Out! Out! The Spanish flag!” and other pro-independence slogans. 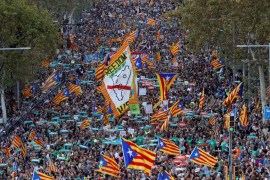 Which other regions want to secede from Spain?

There are four groups in Spain, including the main Spanish identity, each with varying degrees of separatist sentiment. 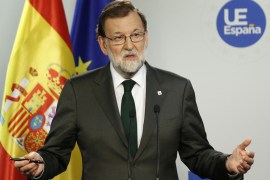