Tehran, Iran – Haider al-Abadi was in Tehran on Thursday for talks with senior Iranian officials. It was a kind of victory lap for the Iraqi prime minister, bookending a tour of the region that included Saudi Arabia and Turkey.

With battlefield victories in Iraq against the Islamic State of Iraq and the Levant (ISIL) group and the retaking control of areas held by Kurdish Peshmerga forces, for al-Abadi and his Iranian allies, things are working out according to plan.

“Iraq and Iran are on the same side on every issue of concern in this part of the world,” said Foad Izadi, a professor of world studies at Tehran University.

In Tehran, the main topic of discussion seemed to be the Kurdish referendum.

Al-Abadi, no doubt feeling like he was in a politically supportive environment here in Iran, had a strong message for Iraqis back home: A suspension of the referendum would not be enough. Nothing short of a complete annulment will do.

His Iranian hosts went even further. Eshaq Jahangiri, the first vice president, said the Kurdish referendum was an act of sedition.

Iran takes the Kurdish calls for autonomy very seriously, worried that it could have a cascading effect on its own Kurdish population.

But Iran has not seen the same kind of Kurdish armed resistance that has thrived in Iraq and Turkey.

Iran’s Kurds enjoy autonomy within a broader Iranian framework. They have been able to preserve their language as well as a unique cultural identity.

They also have political representatives, provincially and in parliament. But all within an Iranian context.

Many Kurds on the Iranian side of the border, however, say their friends and family in the autonomous Kurdish region in northern Iraq are better off because they have more autonomy.

The Iranian view is that more divisions are bad for the region.

“If you start separating different regions, different ethnic groups in this part of the world, you’ll have two or three times more countries than you have now and that’s not going to work out,” Izadi said.

Going forward, the Iraqis are likely to push a political model similar to Iran’s, encouraging Iraq’s Kurds to pursue more rights and representation, but within a national framework that keeps the country whole.

To that end, and in the brief moments between tough talk, al-Abadi reached out a hand of friendship to the Iraqi Kurds saying, northern Iraq is still a part of Iraq.

So, two clear signs from leaders of Iraq and Iran.

First, both countries are on the same page on pretty much everything. And secondly, they will not compromise Iraq’s territorial integrity.

The question now is, what’s next for Iraq’s Kurdish people?

There is no doubt they have sacrificed more blood and treasure than most in the fight against ISIL (also known as ISIS). But, for Iran’s leadership, that does not necessarily mean they deserve their own country.

Following a meeting with the Iraqi leader, the Supreme Leader of Iran Ayatollah Ali Khamenei said unity between different races was a key part of the victory against ISIL in Iraq.

“They basically had lots of autonomy before this recent vote was taken. … and making sure Iraq stays intact will actually ensure a region that is free from conflict. The Middle East, especially this part of the Middle East, has been under a lot of pressure, lots of wars. It’s time for all these things to end.” 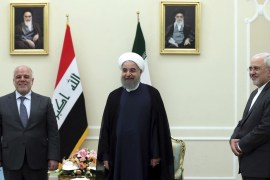 Iraqi president continues his effort to seek regional support against Kurds’ efforts to break up his country. 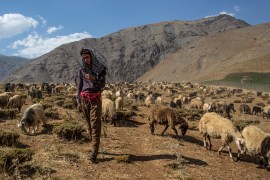 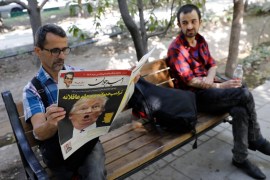 Trump is not only ditching the Iran deal, but Iraq too

The US has snubbed Iran before, with dire consequences for the stability of the Middle East.