Montreal, Canada – Quebec has passed a contentious law that would make it illegal for Muslim women, and other individuals, who cover their faces to receive public services, including riding public buses.

Members of the provincial legislature voted 65-51 in favour of the legislation on religious neutrality, known as Bill 62, on Wednesday morning.

The law forces citizens to uncover their faces in order to receive or give public services in the French-speaking province.

It applies to provincial and municipal employees – including doctors, nurses, teachers and daycare workers – and public transit workers.

Shaheen Ashraf, a board member of the Canadian Council of Muslim Women based in Montreal, said she was “disturbed and unsettled and upset” that the legislation was passed.

Muslim women in Quebec “are feeling targeted” by the law, which is the latest in a series of attempts by the provincial government to “raise the issue of Muslim women’s attire”, Ashraf told Al Jazeera.

“The message they’re sending to those women is that you stay home and don’t come out of your house because they are choosing to cover their faces and they cannot board a bus or use any public transportation or receive any services,” she added.

“So what are they supposed to do?”

Quebec Justice Minister Stephanie Vallee first tabled the bill in 2015 after several years of contentious debates in the province over religious symbols in the public sphere and the issue of religious accommodation for minorities.

Vallee has defended the legislation, telling CBC News this week that it was about “living together in harmony”.

“It’s a bill about guidelines and clearly establishes neutrality of the state,” Vallee said.

The Liberal Party, which holds a majority in the provincial legislature, backed the bill, while opposition parties voted against it because they said it did not go far enough.

The ban will go into effect immediately, but the provincial government has not provided clear guidelines for how public agencies should respond when individuals seek services with their faces covered.

The government is expected to form a committee to provide advice soon.

Ihsaan Gardee, executive director of the National Council of Canadian Muslims, said in a statement that the legislation is “an unjustified infringement of religious freedoms” that runs contrary to the Canadian Charter of Rights and Freedoms.

Gardee added that the advocacy group will be looking into legal avenues “to defend the fundamental rights and freedoms of Canadian Muslims and, by extension, those of all Canadians”.

The government has said individuals would be able to apply for an exemption based on religious accommodation.

It plans to release guidelines before July on how such religious accommodation exemptions will be allocated.

Currently, the bill states that accommodation is possible for a handful of reasons, including as long as it “does not compromise the principle of State religious neutrality”.

But legal experts and mayors across the province have questioned how such an exemption, and the law itself, would be implemented.

Denis Coderre, the mayor of Montreal, Quebec’s largest city, has accused the provincial government of overstepping its authority by telling municipalities how they can administer public services.

Coderre has said Bill 62 will be impossible to implement.

“Are we going to say to the driver, ‘I’ve become the burqa or niqab police, and I’ll decide who gets on the bus or not?'” Coderre was quoted as saying in August by the Globe and Mail.

“And if the driver says you can come in, will we have citizens who take the law into their own hands?”

Meanwhile, Maxime Pedneault-Jobin, the mayor of Gatineau, Quebec, recently told CBC the legislation is “a solution to a problem that doesn’t exist except in principle”.

Haroun Bouazzi, co-president of AMAL-Quebec, an association that works on issues of secularism and citizenship in the province, said many Muslims in the province are afraid to speak out against the legislation.

“People are scared because the debate is extremely violent,” he told Al Jazeera.

Bouazzi said that by passing the legislation, Quebec has affirmed that it can “take away fundamental rights with no real nor urgent reason”.

“It’s a sad day for democracy in Quebec.” 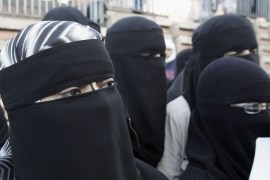 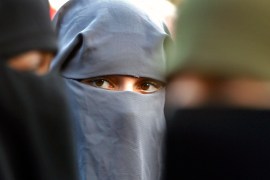 News media say law due to take effect soon also prohibits import and marketing of garment in “all cities and towns”.