Nairobi, Kenya – A rerun of the August presidential election is set to go ahead on Thursday after a last-minute attempt to block the vote failed at the Supreme Court.

Kenya’s Supreme Court was unable on Wednesday to raise a quorum of judges to decide on whether the poll should go ahead, as the political crisis gripping the East African nation shows no sign of ending.

The petition was brought by three human rights activists who claimed the electoral commission is not ready to hold a credible poll.

Opposition leader, Raila Odinga, plans to boycott the poll, which was decided on after the Supreme Court last month annulled the August 8 presidential election result.

“Regrettably and with due apology to all the parties, this matter cannot proceed to hearing this morning as earlier scheduled,” David Maraga, Kenya’s chief justice, told the court.

“It is accordingly adjourned to a date to be taken in the registry,” Maraga added.

Four of the bench’s seven judges were not present, Maraga said. Five judges are needed for a quorum.

A lawyer for the opposition said the shortage of judges was not coincidental.

“The lack of quorum on the part of the Supreme Court is not by coincidence [or] by accident,” James Orengo told reporters outside the court.

“There is an attempt to undermine the authority of the institutions of government including independent institutions like the electoral commission and the Supreme Court,” Orengo said.

“If the commission dares goes on with the purported election tomorrow … it will be illegal and unconstitutional,” he added.

“We will decide and move our country forward tomorrow.”

The electoral board later confirmed the vote would go ahead.

“Based on assurances given to this commission by the relevant authorities and security agencies, based on the progress that has been made in the commission, the elections as scheduled will go on tomorrow,” Wafula Chebukati, Independent Electoral and Boundaries Commission (IEBC) chairman, told reporters.

There was a heavy presence of security forces outside the court and across the city as the opposition planned to hold a rally.

Odinga has called on his followers to boycott the poll, saying he will announce on Wednesday a “way forward”.

Odinga withdrew from the race claiming opposition demands to reform the electoral commission has not been met.

Analysts say Wednesday’s ruling does not mark the end of the political crisis.

“I have no doubt in my mind that tomorrow’s poll and its result will be challenged in court. This is not the end of it,” Irungu Houghton, a political analyst based in the capital, Nairobi, told Al Jazeera.

“The IEBC (Independent Electoral and Boundaries Commission) is divided and not trusted by many. And today’s event shows the Supreme Court is unable to respond to request to hear a case and show the way forward,”

The August 8 poll result was annulled after the court found “illegalities and irregularities” in the voting process. The opposition then demanded electoral body reforms and refused to take part in a rerun unless those requests were met.

Earlier this month, a senior official at the IEBC resigned and fled the country saying she feared for her life adding that Thursday’s poll will not be credible.

“The election will go ahead tomorrow in some constituencies but will not happen in opposition strongholds. Many people will also not vote because it is a foregone conclusion that Kenyatta will win with Odinga not on the ballot,” Houghton said.

On Tuesday, 20 Western ambassadors based in Nairobi warned that “inflammatory rhetoric, attacks on institutions and growing insecurity” were making it difficult to hold a credible and fair poll in the country.

“It is easier to tear down than to build up. But it is dangerous, and it must stop,” Bob Godec, US ambassador to Kenya, said in a statement on behalf of the 20 envoys. 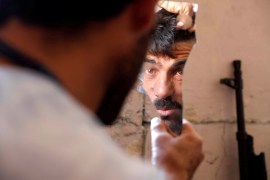 Week in pictures: From Kenya protests to Paris strike

A photo roundup of some of last week’s key events, including wildfires in California and the fight against ISIL.