ISIL has been accused of executing scores of people in a town it briefly held in central Syria before it was seized by Syrian government forces, according to a monitoring group and local activists.

Al-Qaryatayn town, which was captured by the Islamic State of Iraq and the Levant (ISIL, also known as ISIS) group in early October, was retaken by troops loyal to Syrian President Bashar al-Assad on Saturday.

According to the UK-based Syrian Observatory for Human Rights, at least 128 people were killed by ISIL fighters in the three weeks before their withdrawal from the town in Homs province on Friday.

The civilians were killed on accusations of collaborating with the Syrian government, activists said.

Mohammed al-Homsi, a member of the Palmyra Coordination Committee, told Al Jazeera that a list containing the names of at least 90 people who were confirmed dead would be released soon.

“It is taking us a while because we want to double check the names of the people who were killed,” al-Homsi said.

“Most of the casualties were men, but there are some children among them.”

Al Jazeera’s Hashem Ahelbarra, reporting from the Turkish city of Gaziantep on the border with Syria, said that thousands of civilians concerned about their safety wanted to flee Qaryatayn during its siege, but were blocked by ISIL.

“Some of those people determined to leave were executed by ISIL fighters,” he added.

Ahelbarra said that opposition activists and civilians whose relatives were killed in Qaryatayn said, “this was an act of revenge by ISIL fighters”.

“But at the same time, they said that the government had also committed atrocities against civilians in Qaryatayn in the past, accusing them of collaborating with ISIL.”

Ahelbarra said that the town had changed hands many times in recent years.

Qaryatayn, which remained largely neutral during the first years of the Syrian conflict, was overrun by ISIL in August 2015, following the armed group’s capture of Palmyra.

“At that time, families left and eventually settled either in the Rukban refugee camp on the border with Jordan or in areas in the north of the country,” al-Homsi said.

In April 2016, the town was taken by Syrian government forces, which, according to al-Homsi, prevented its residents from returning on the basis that they were either heavily involved or supporting the fight against Assad.

Eventually, the government agreed that 20,000 civilians could return.

Al-Homsi said ISIL’s recapture of the town this month had shocked its residents and raised huge question marks.

“How did ISIL enter and then manage to leave Qaryatayn when the army has all of the surrounding areas under its control?” he asked, alleging that pro-government troops also killed some of the town’s residents.

“ISIL began the attack and killed people because of their alleged support to the government, and when the Syrian forces entered they carried on killing the people there based on their supposed affiliation to ISIL,” he said.

The government has not yet commented on the number of civilians killed.

However, the Syrian Central Military Media on Saturday said that “the Syrian army and its allies have restored security and stability to Qaryatayn”. 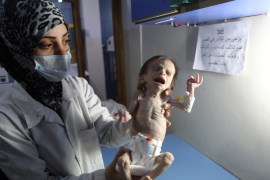 At least two babies die of malnutrition as eastern Ghouta remains under siege by regime forces.

Monitor reports artillery and rocket firing at ISIL positions in lead-up to entry into southwestern part of al-Sukhna.