A Kurdish opposition group that opposed the recent referendum on secession from Iraq, on account of poor timing, has called for the Kurdistan Regional Government (KRG) leader to resign.

Gorran, or the Movement for Change, called for a “national salvation government” in a statement posted on its website, saying the KRG “must be dissolved”.

KRG leader Masoud Barzani, the party said, “refused to listen to our demands and those of Baghdad”, leaving the Kurdish region “with another terrible crisis”.

“What has happened now does not demonstrate the failure of our people and the Kurdish nation, rather it is the defeat of the authority and officials who caused the biggest crisis and disaster to the Kurdish people,” the statement said.

People in the semi-autonomous Kurdish region of northern Iraq voted for independence on September 25 in a controversial referendum, amid rising tensions and international opposition.

The US and other Western allies of Iraq had urged Barzani to cancel or postpone the vote.

More than 92 percent voted “Yes” to secession, with the turnout at almost 80 percent.

The referendum set off a chain of events, culminating in a military confrontation between Erbil and Baghdad.

Iraqi government forces launched a major operation in Kirkuk on October 16 aimed at re-taking the Kurdish-held city, advancing towards oil fields and a strategic military base.

The Kurdish collapse was sudden.

The decision to hold the referendum in the face of near-universal condemnation now appears to have been a colossal miscalculation, analysts said, with Barzani vastly overestimating the KRG’s political and military heft and undermining his legitimacy.

Elsewhere on Monday, the Kurdistan Region Security Council (KRSC) – established in 2011 and headed by Barzani’s son – called on the Iraqi government to “immediately cease its military aggression and withdraw from all territories” in a statement.

The KRSC was concerned by “continued military buildup of Iraqi forces and Iranian-backed PMF towards the Kurdistan region,” the statement read. “In the last 48 hours, Iraq has continued to deploy tanks and artillery, as well as American equipment.”

Iraq has not shown any sign of de-escalating “military aggression” against people of the Kurdish region, the KRSC said, repeating a call for talks. 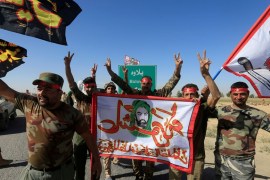 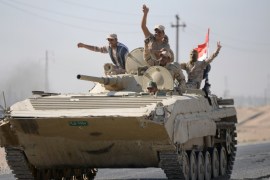