Last week, the deadliest bomb blast to hit the Somali city of Mogadishu killed more than 350 people and injured around 400 others.

Questions are now been asked as to why, more than 10 years after African Union peacekeepers set foot in the capital and six years after the al-Qaeda-linked group al-Shabab was pushed out, attacks still plague the coastal city.

The Somali government blamed the October 14 blast on al-Shabab.

President Mohamed Abdullahi Mohamed Farmajo told Al Jazeera on Tuesday that the truck explosion which struck Zobe intersection – a busy junction lined by shops, offices and homes – had all the hallmarks of the group.

“This is their fingerprints, this is what they have done,” Farmajo said.

Since the start of this year, more than 20 explosions have targeted Mogadishu, killing at least 500 people and injuring more than 630.

Most of the attacks were carried out by al-Shabab, which has lost control of most major towns and cities in the country.

More than 24,000 African troops have been sent to defeat the group. But the African Union Mission in Somalia (AMISOM) says they are not at fault for the blasts.

“The security work has been divided. AMISOM is in charge of Villa Somalia [presidential palace] and the airport. Entry and exit points of the city is the work of the Somali security forces and the Mogadishu stabilisation force,” said an AMISOM spokesman.

The Western-backed government, which is struggling to pay its soldiers, says it has done much to improve the security situation in the capital.

“In the last five months, [we] formed the Mogadishu Stabilisation Force which consists of 500 police officers, 500 intelligence officers and 500 military officers. They have stopped many attacks and saved many lives,” Abdirahman Omar Osman, Somalia’s information minister, told Al Jazeera.

“We have defeated them militarily. The terrorists are very desperate and the only option left for them is suicide bombing which we are working hard to stop,” Osman added.

“They target Mogadishu because it is the capital and they want to show the world they are still active. It is an act of desperation,” he added.

But analysts say more needs to be done not just to improve the security situation but bring about lasting peace.

Abdullahi Boru, a Horn of Africa security analyst, said Somalia needs to find other solutions in addition to the military option.

“Unpalatable as it is, political negotiations including with al-Shabab since they are at their weakest needs to be seriously considered,” Boru said. 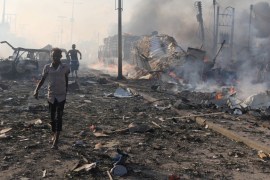 Bombings in Mogadishu – a 2017 timeline

The Somali capital has witnessed some of its deadliest attacks this year. 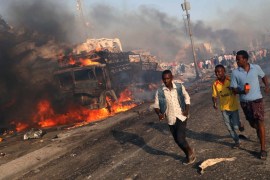