Much of southern and central Japan is on high alert as Typhoon Lan approaches. The outer bands of the storm have been lashing parts of Kyushu and Honshu for the last two days.

The centre of Typhoon Lan, which is locally known as Paolo, is expected to make landfall just to the west of Tokyo, late on Sunday night local time.

People voting in Japan’s snap election managed to get out to the polling stations before the worst of the winds, but the torrential downpours had already set in.

At one stage, Lan was packing winds of around 240 kilometres per hour.

At this stage, it was classified as a super typhoon, equivalent to a Category 4 hurricane on the Saffir-Simpson scale.

It has since weakened, but it does remain a dangerous system capable of causing catastrophic damage.

Further weakening is expected, but at landfall, those winds are still likely to be around 185km/h with much higher gusts. Devastating damage is possible.

There will be widespread disruption, particularly since so many people will be affected as the storm passes very close to Tokyo.

The Japanese capital has already had 101mm of rain in the 24 hours up to 06:00 GMT on Sunday. That is well over half the average October rainfall figure of 198mm.

Rainfall totals have been significantly higher elsewhere. Oshima recorded 204mm of rain. Shionomisak was even wetter, notching up 236mmin the same period.

Honshu is likely to receive its heaviest snow of the season so far as the storm sweeps through during Monday. All should be quiet by Tuesday with barely a cloud in the sky. 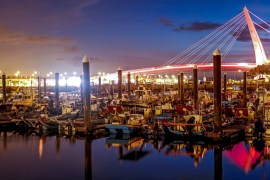 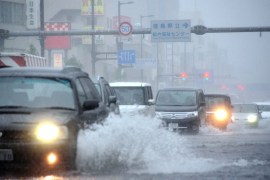