US Secretary of State Rex Tillerson is in Saudi Arabia for the start of his Middle East tour as part of a new push to end the Gulf crisis.

The top US diplomat landed in Riyadh on Saturday and met Saudi Foreign Minister Adel al-Jubeir.

On Sunday, Tillerson participated in the inaugural meeting of the Saudi Arabia-Iraq Coordination Committee, along with Saudi King Salman and Iraqi Prime Minister Haider al-Abadi. The committee aims to improve ties between Iraq and Saudi Arabia that have long been regional rivals.

The secretary of state was also scheduled to meet with Crown Prince Mohammed bin Salman to discuss the ongoing diplomatic dispute with Qatar, now in its fourth month, according to the US state department.

On June 5, Saudi Arabia, the United Arab Emirates (UAE), Egypt and Bahrain cut diplomatic ties with Qatar and imposed a land, air and sea blockade on their Gulf neighbour, accusing it of financing “terrorism” and maintaining too close of ties to their regional rival, Iran. Doha denies the allegations.

While in the kingdom, the inaugural Coordination Council meeting between the governments of Saudi Arabia and Iraq will also be on Tillerson’s agenda.

After Riyadh, the secretary of state is due to travel to Qatar’s capital, Doha, on Sunday, where he will meet Qatari Emir Sheikh Tamim bin Hamad Al Thani and Foreign Minister Sheikh Mohammed bin Abdulrahman Al Thani.

Tillerson offered little optimism about a solution to the Gulf crisis in advance of his Middle East tour, blaming the Saudi-led group of countries for the lack of progress.

“I do not have a lot of expectations for it being resolved anytime soon,” he said in an interview with financial news agency Bloomberg on Thursday.

“There seems to be a real unwillingness on the part of some of the parties to want to engage … It’s up to the leadership of the quartet when they want to engage with Qatar because Qatar has been very clear – they’re ready to engage,” added Tillerson.

Marwan Bishara, Al Jazeera’s senior political analyst, said the Qatar crisis “is becoming an embarrassing topic” for Saudi Arabia and the UAE “simply because Washington has already moved on”.

“It’s no longer taking their arguments seriously and the whole bit about Qatar supporting terrorism and instability in the region is, of course, proving false,” Bishara added.

“Clearly, Tillerson has other bigger issues in mind, especially the containment of Iran, and reckons the Qatar crisis is simply a distraction and counterproductive of the overall policy that the US is seeking in the region.”

Tillerson last visited the Gulf states in July. Despite an intense round of shuttle diplomacy that also took him to Kuwait, which has led the mediation efforts, tensions have remained high between the Gulf neighbours.

“He tried before, he tried to be nice with everyone but this took him nowhere and produced no results so I think he has probably realised that the time has come to use some leverage,” Ibrahim Fraihat, foreign policy expert at the Center for Conflict and Humanitarian Studies in Doha, said.

Analysts say there is renewed hope the blockading countries might be more willing to engage this time around.

“The president [Donald Trump], for example, has tried to put pressure on the Saudis and the UAE to be willing to meet to resolve some of the sanctions that they put on Qatar,” Lawrence Korb, senior fellow at the Centre for American Progress, told Al Jazeera.

Korb also cited Trump’s recent push to decertify the Iran nuclear agreement as a factor that could make Saudi Arabia more willing to “work with the US to deal with the situation with Qatar”.

After the stops in the Middle East, Tillerson will go to Pakistan and India, and then to Switzerland on his way back to the US. 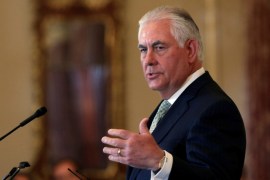 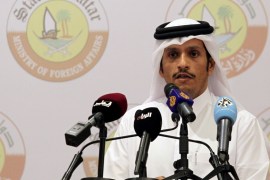 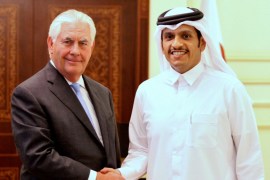 US Secretary of State wraps up GCC trip after travelling to Doha for the second time in 48 hours.