Spanish Prime Minister Mariano Rajoy has confirmed that Spain will go forward with Article 155 after his cabinet held a crisis meeting to decide how to put an end to Catalonia’s secession drive.

The previously untapped article of Spain’s constitution will enable Madrid to seize powers from the wealthy northeastern region.

Rajoy listed four goals for enacting Article 155: A return to legality, to recover normality and co-existence, to continue with economic recovery and to have an election in Catalonia in “normal political circumstances”.

The Catalan government will be dissolved as a result.

Rajoy told reporters in Madrid that Catalonia’s independence drive has been “unilateral”, calling the October 1 independence vote a “referendum that the whole world knew the Spanish government couldn’t accept”.

Catalonia voted in a disputed independence referendum on October 1 that met a heavy police crackdown from the Spanish national police and civil guard, a military force tasked with domestic law enforcement.

The Catalan government said 90 percent voted in favour of secession, but turnout was less than 50 percent.

Catalan President Carles Puigdemont declared independence on October 10, but suspended the declaration to encourage talks with Madrid. A series of ultimatums from Madrid followed. To date, no direct talks have taken place.

Rajoy said that dialogue was never offered to the Spanish government, only an “imposition” from the Catalan leaders.

When asked if he feared further protests and instability in Catalonia as a result of Article 155, Rajoy responded: “I think the only fear a leader can have is to not comply with his obligations.”

The article allows central authorities to intervene if a regional government “doesn’t comply with the obligations of the Constitution or other laws it imposes, or acts in a way that seriously undermines the interests of Spain”.

It also requires a vote of absolute majority from the Spanish Senate, which is expected to meet next Friday to address the measure.

Rajoy, who leads a minority government, has the support of the centre-left Socialist party and centre-right Citizens party, which will be enough votes to enact Article 155.
But the measure has never been used, is only two paragraphs long and does not provide a blueprint for implementation.

Al Jazeera spoke with Ignacio Garcia Vitoria, a constitutional law professor and expert from Madrid’s Complutense University, about Article 155, why Catalonia’s independence referendum is illegal under Spanish law and the possibilities of constitutional reform.

Al Jazeera: Article 155 is brief. How much power does it give the Spanish government to manage the Catalan government?

Ignacio Garcia Vitoria: The application of the article does not mean the suspension of the autonomy of Catalonia, which is protected by the Constitution and the Statute of Autonomy. It says that the government can adopt “necessary measures” to force the institutions of an autonomous community to fulfil its constitutional obligations.

Al Jazeera: So, how general can the national government be in its control of Catalonia?

Garcia: I believe that the application of Article 155 does not involve the adoption of a single measure of general extent, but rather the possibility of progressively taking concrete measures.

For example, ordering the regional police to comply with the rulings issued by the courts or to order autonomous officials to take action to curb the illegal collection of personal data of Catalan citizens. Each of the measures adopted will be subject to double control: Political, through the prior authorisation of the Senate and also through Congress, through parliamentary control instruments (questions, interpretations, motions …); and legal control [through the courts].

Depending on the nature of each of the measures adopted by the government, the jurisdiction would be the Constitutional Court or ordinary jurisdiction. In short, it is not a general suspension, but a limited power and subject to political and judicial control.

Al Jazeera: Has there been a previous use of Article 155 that the Spanish government can use as an example?

Garcia: There has been no precedent in the 40 years of the Constitution that an institution of an Autonomous Community has [had Article 155 enacted].

There have been conflicts, which have been resolved through negotiation and also through judicial appeals where it has not been possible to reach an agreement.

But always from the conviction that the constitutional norms bind us all. And that legitimate attempts to revise or modify those standards should be made in accordance with the rule of law.

It is a break from the classical principles of the rule of law and constitutional democracy. It is a unique case in Spain and in Europe.

Al Jazeera: If the Senate approves the implementation of Article 155, what are the limits of its use?

Garcia: Article 155 sets a direct limit: the need for the measure. The control of the proportionality of the government’s action is a well-established principle in our legal system.

This temporary suspension can only occur through states of emergency (article 55.1 of the Constitution). [There will be] internal judicial control and also control from EU institutions and the European courts.

Al Jazeera: Is there something you believe international readers should understand about Spain’s Article 155?

Garcia: Article 155 is not a unique aspect of our constitution. Spain is not different. Germany or Italy, countries to which we looked when we adopted the 1978 Constitution, contain similar rules (Article 37 of the Fundamental Law of Bonn and Article 120 of the Italian Constitution).

We have a constitution that can be reformed. It even admits the possibility of a total revision of the Constitution. It is a topic that we have been discussing, sometimes more in the academic than in the political arena. In 2014, we published a group of teachers a book titled Guidelines for Constitutional Reform. The reform procedures and required majorities are similar to those in other countries around us.

I would personally like to see, for example, a better distribution of powers or greater protection of social rights. But I need the political majorities required to reform the Constitution. And if I do not have them, I will have to work in the political arena to achieve my aspirations. Getting those majorities in the elections or negotiating with other political forces.

What we are discussing is whether autonomous institutions can threaten the rupture of the constitutional system to achieve certain political objectives.

It is possible to discuss the desirability of including a withdrawal clause in the Constitution, such as that used by the United Kingdom to leave the EU.

But it is not a constitutional reform that can be imposed by the government of an Autonomous Community, because the Constitution is a common good for all.

*This interview has been translated from Spanish and condensed for clarity. 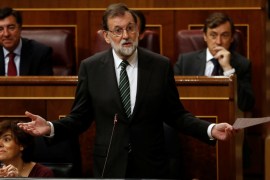 Madrid vows to impose direct rule in Catalonia unless declaration of independence is retracted. 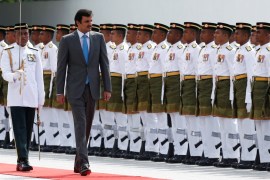