At least 52 Egyptian police and conscripts were killed and six more wounded in a gun battle on Friday during a raid on a hideout of fighters in the western desert, security sources said.

Sources had said late on Friday at least 30 police were killed.

Egypt is battling armed groups concentrated in the Sinai peninsula, including an Islamic State of Iraq and the Levant (ISIL, also known as ISIS) affiliate, that has killed hundreds of security forces since 2013.

The interior ministry released a statement on the operation on Friday but has so far not given any details on casualties. At least 23 police officers were killed and the other victims were conscripts, the sources said.

Reuters news agency quoted sources as saying the deaths occurred on Friday when the officers were following a lead to an apartment thought to house eight suspected members of Hasm.

Hasm is a group that has claimed several attacks around Cairo targeting judges and policemen since last year.

The suspected fighters tried to flee after the exchange of fire there, the sources said, and continued to shoot at a second security unit called in for back-up from atop neighbouring buildings.

The fighters also used explosive devices in the attack, the sources said, adding that 16 officers died in the shoot-out and the number was expected to rise.

Two security sources said eight security personnel were injured in the clashes, while another source said that four of the injured were police officers and four others were suspected fighters.

A number of suspected fighters were also killed and security forces were continuing to comb the area, a statement by the interior ministry said.

The Associated Press news agency quoted an Egyptian security official as saying the exchange of gunfire occurred in al-Wahat al-Bahriya, a district in the Giza governorate, about 135km from Cairo.

He too said eight other security personnel were wounded in the attack.

A convoy of four 4×4 vehicles and one interior ministry vehicle was ambushed from higher ground by the fighters firing rocket-propelled grenades and detonating explosive devices, a senior source in the Giza Security Office said.

Egypt has been under a state of emergency since bombings and suicide attacks targeting minority Coptic Christians killed scores earlier this year.

A violent anti-government campaign in the Sinai Peninsula has grown since the military overthrew democratically elected President Mohamed Morsi of the Muslim Brotherhood in mid-2013.

The armed group staging the campaign later pledged allegiance to ISIL in 2014.

It is blamed for the killing of hundreds of soldiers and policemen and has started to target other areas, including Egypt’s Christian Copts. 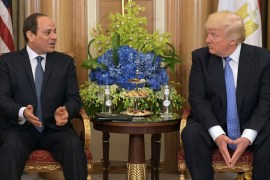 Is the US punishing Egypt by cutting aid?

Washington is withholding millions of dollars in aid to Cairo over concerns of human rights abuses. 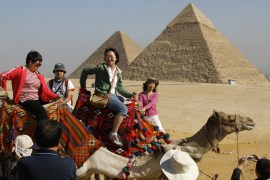 Egypt: Made in China

The story of the Chinese community in Egypt which has grown in recent years along with trade between the two countries. 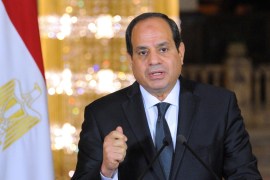