Correction20 Oct 2017
A previous version of this story stated, based on the Iraqi defence ministry's statement, that Altun Kupri had been seized by the federal army. The KRG security office, however, has not confirmed the loss of the town by the Peshmerga to Iraqi forces.

Iraq’s government says security forces have seized control of a town in the oil-rich province of Kirkuk, following manoeuvres that saw Iraq’s Kurds surrender territory across the north and east of the country.

The federal army, backed by Shia paramilitaries, said they seized control of Altun Kupri, about 40km south of Erbil, on Friday after fierce fighting broke out between Iraqi government and Kurdish Peshmerga forces.

“Iraqi federal police and counterterrorism forces, along with Hashd al-Shaabi fighters, have deployed in – and imposed security on – the sub-district,” the Iraqi defence ministry said in a statement.

“Altun Kupri is now under the total control of federal forces.”

In a statement after Iraqi forces completed their takeover of Kirkuk province, the US state department said it was concerned by reports of violent clashes around Altun Kupri.

“In order to avoid any misunderstandings or further clashes, we urge the central government to calm the situation by limiting federal forces’ movements in disputed areas to only those coordinated with the Kurdistan Regional Government,” it said in a statement.

The department made it clear that even though federal authority was reasserted over “disputed areas”, that in no way changes their status – “they remain disputed until their status is resolved in accordance with the Iraqi resolution”.

Al Jazeera’s Stefanie Dekker, reporting earlier on Friday from the Erbil-Kirkuk Highway, a few miles from the front line, said two bridges in the area had been destroyed, but it was unclear by whom.

“Immense military reinforcements are being sent by the Peshmerga as well as trucks carrying ammunition,” she said.

“A new checkpoint has been set up where there wasn’t one, and the Peshmerga are defending their positions.”

Thick plumes of smoke could be seen in the distance, and hospitals confirmed receiving wounded people, she said.

“People are fleeing the fighting with everything they own – even transporting their cows.”

The reported control of Altun Kupri is part of an operation launched on Monday, on the orders of Haider al-Abadi, Iraq’s prime minister, to retake disputed areas between Baghdad and the Iraqi semi-autonomous region governed by the Kurdistan Regional Government (KRG).

Iraqi troops and allied paramilitaries retook the northern province of Kirkuk and its lucrative oilfields on Monday and Tuesday, as well as formerly Kurdish-held areas of Nineveh and Diyala provinces – all outside the KRG region.

The Peshmerga seized Kirkuk, Iraq’s second oil hub, in mid-2014 when Iraqi troops withdrew from the advancing Islamic State of Iraq and the Levant (ISIL) group. 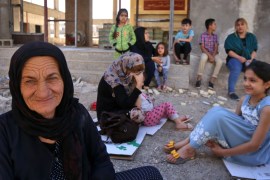 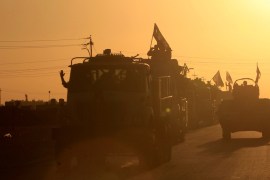