Jojutla, Mexico – It was one month ago that Penelope Benitez Amador felt the floor start to shake at the high school where she worked just outside Jojutla, Mexico.

When the shaking stopped, she immediately headed towards the school her children attended in Jojutla.

“It was a chaos, the cars, the people running and screaming, terrified about their loved ones,” she said. “It looked like a warzone.”

Now, one month after the 7.1 earthquake struck central Mexico, killing 370 people and destroying thousands of buildings, Benitez Amador says towns like Jojutla are struggling to recover.

A municipality of 50,000 people about 80km south of the capital Mexico City, Jojutla has become a major commercial centre for the region.

The September 19 earthquake killed at least 30 people in the small town and damaged more than 3,000 buildings beyond repair.

“We’ve had earthquakes before, but never this bad,” the high school English and business teacher added. “The majority of Jojutla has been affected.”

With dozens of businesses destroyed, Jojutla’s economy has been severely hit.

“Many businesses collapsed, and the ones that survived are losing customers and facing higher rents,” Amador told Al Jazeera.

“It affects everything. I’ve heard it could be two or three years until our economy recovers.”

No money to rebuild

Amador and her children live in Higueron, a housing development complex in Jojutla, where she is president of the neighbourhood association.

She said she was shocked when she arrived in Higueron after the major tremor.

“The front gate was broken down, there were houses cracked open, people were crying,” she said.

“I was shaking, and the only thing I could do was hug my neighbours and tell them that everything was going to be OK. Fortunately, there were no deaths in Higueron, and that’s the important thing.”

A census by local and federal governments in the weeks after the earthquake clarified the scale of the devastation, finding that the tremor only spared 12 of the 157 houses in housing development from major damage, and left 73 beyond repair.

The census-takers marked the buildings with colour-coded spray paint to signify the level of damage: green means no serious damage, yellow means reparable damage and red means a total loss and that the building is unsafe and needs to be demolished.

Higueron was built in the 1980s by Infonavit, a federal programme that provides low-interest loans for workers to buy houses in government-funded developments.

The development is now 34 years old and nearly all of its residents have already paid off their Infonavit credits, leaving them with full responsibility of the houses.

“Once you pay off your credit, you’re responsible for the house, and you have to buy insurance if you want to protect it,” Benitez Amador said.

“But in Mexico, we don’t have a culture of buying insurance, so a lot of us are very worried because we don’t have the money to build a new house.”

The federal government has guaranteed payments to those who have lost their homes through the Natural Disaster Fund (Fonden).

People whose homes were marked as total losses in the census will be eligible for payments of 120,000 pesos (around $6,300).

But the sum is quite small compared with the value of most houses in Morelos state, and will only begin to cover the cost of rebuilding.

Dozens of residents in Higueron who lost their homes are living in a nearby park in tents that have been donated by the Chinese government.

“We’ll probably be living like this for a while because people don’t have the money to rent rooms, and rents have gone way up since the earthquake,” said Benitez Amador.

Benitez Amador, like many Higueron residents, worries the government won’t fulfil its promises of providing relief to those most affected.

Across Morelos, rumours about the government obstructing citizen relief efforts have abounded on social media, with some accusing the state government of stealing supplies in order to use them as handouts in upcoming election campaigns.

The government has denied such allegations, but general mistrust of the government’s commitment to relief remains.

On Wednesday, a delegation from the Michoacan section of the National Social Security Workers Union (SNTSS), travelled to Higueron to hand out bottled water, food, medicine and other supplies.

Salatiel Oropeza Hernandez, a member SNTSS, told Al Jazeera that the union prefers to send aid directly than to deal with the government.

“Unfortunately, we’ve found out that the state government in Morelos is stockpiling supplies in warehouses, instead of giving them out to the people who need them,” he said.

“I’m giving them the benefit of the doubt that they’re doing that because they want to ration the supplies and give them out little by little. But we see a real urgent need, so that’s why we’re bringing things directly.”

Jojutla Mayor Alfonso Jesus Sotelo Martinez told Al Jazeera that he understands this mistrust, and he has taken measures to make the local government’s relief efforts as transparent as possible.

“I understand that there is a great distrust of government on the part of civil society, and we’re taking steps to address that issue by promoting citizen councils,” he said.

“We’re channelling all of the donations through the citizen councils, so that it’s not the government who receives it, or who gives it out.”

But the mayor admitted that his government was not really prepared for the challenges brought by the earthquake.

“[The government] can’t do it alone, we need the people’s help,” he said.

“If we had to do it alone, I would just throw in the towel. But luckily, the people are active and ready to help.”

For Benitez Amador, there is a hard road ahead, but she is confident that the people of Jojutla will be able to rebuild their city and return to normal life.

“This is where we’re from, we can’t just go somewhere else,” she said.

“It’s going to be hard, and it’s going to take years, but we have fighting spirits, and we know how to make do with what we have. Little by little, Jojutla is going to recover.” 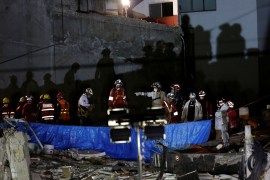 Rescue workers recover the body of the last person known to be missing after the earthquake. 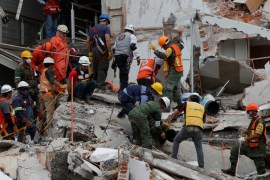 Death toll rises to 230 as President Enrique Nieto says ‘every minute counts to save lives’.