Ex-footballer George Weah is expected to face Liberian Vice President Joseph Boakai in a runoff for the country’s presidency, after no candidate gained an absolute majority in the October 10 election.

The final results are expected by October 25.

According to Liberia election rules, if no candidate gains an absolute majority in the first round of the election, a runoff between the top two candidates will follow. The runoff is expected to take place in early November.

In the first round, 20 candidates sought to replace President Ellen Johnson Sirleaf, who is stepping down after serving the maximum two six-year terms.

Weah, who is running under the Coalition for Democratic Change (CDC), is considered one of the greatest African football players in history, winning the FIFA world player of the year award in 1995.

He entered politics in 2005 when he ran against Sirleaf in the country’s first election after 14 years of civil war. Although he won the first round of the poll, he lost in a runoff with Sirleaf.

Weah lost again in 2011 when he ran as a vice presidential candidate.

The CDC is “prepared for a runoff, and we are confident that we are going to win a run-off”, Wilson Tarpeh, a spokesman for Weah’s party, told AFP news agency.

According to local media, Boakai, 72, has sought to somewhat distance himself from Sirleaf and define his own political agenda.

Mohammed Ali, a spokesman for the ruling Unity Party, told Reuters news agency that the party is “disappointed that there is going to be a runoff … but [the party] will accept it and go with it”.

Once a winner is declared, it will represent the country’s first democratic transition of power in more than 70 years.

Liberia emerged from a brutal civil war in 2003 after more than 250,000 people were killed in 14 years of fighting. 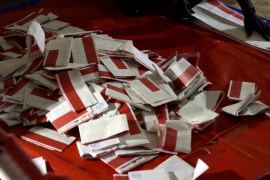 The country chooses a president and legislators in the first democratic transition of power in more than 70 years. 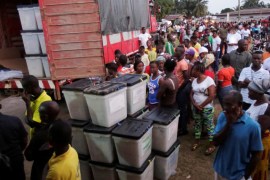 Liberia heads to the polls to elect a new president

Liberians are voting on Tuesday to pick a new leader and members of the upper house.