“Only by proclaiming the republic will we be able to position ourselves as an actor willing to protect the civil and political rights of the population still seriously threatened,” says the letter, which was released on Friday.

Puigdemont declared on October 10 an independent Catalan republic following the disputed referendum on October 1. Then, to the dismay of CUP and other nationalists, suspended the effects of the declaration after eight seconds.

According to Puigdemont, it was an attempt to foster dialogue with the national government in order to make a peaceful declaration of independence.

Spanish Prime Minister Mariano Rajoy responded with an ultimatum. Puigdemont must clarify whether or not he declared independence by Monday. If he affirms the declaration, or declines to respond, Rajoy promises to invoke Article 155 of the Spanish constitution which will strip Catalonia of its autonomy.

Puigdemont responded on October 11 by tweeting: “Ask for dialogue and they answer you by putting the 155 on the table. Understood.”

No talks were known to have taken place.

“The problem with talks is that there is a fundamental disagreement between the two sides about what the problem is,” said Sebastian Balfour, emeritus professor of Contemporary Spanish Studies at the London School of Economics and Political Science.

Rajoy claims he is open to discussing Catalonia’s autonomy. Spain comprises 17 autonomous communities, which have varying degrees of decision-making power within their borders and negotiating power with the Spanish state.

Catalonia, one of the richest autonomous communities, which accounts for 20 percent of Spain’s gross domestic product, has long decried Madrid’s handling of its tax contributions. Figures from 2014 show Catalonia paid Spain 9.89 billion euros more in taxes than it received in state spending.

Catalonia is also home to a distinct language and culture which has come under threat from Madrid numerous times over the past 300 years, most recently under the far-right Franco dictatorship that ruled Spain from 1939 to 1975.

One of Franco’s policies was to unify Spanish identity.

Catalan, as well as any other minority languages, were outlawed from being spoken in public. Dissidents were abused and killed often by the Civil Guard, a military police force.

Some Catalans, including members of CUP, who referred to the “violence deployed by the military and police occupation”, fear that Spain is once again using heavy-handed police presence to enforce its rule.

A question of political survival

With rights groups and European leaders criticising Madrid’s response and Puigdemont offering dialogue, it would seem possible that Rajoy would be open to talks.

But a de-escalation “involving talks about independence would undermine the support he gets on the issue from the whole political spectrum from centre to right”, Balfour explained.

Rajoy, who is from the right-wing Popular Party (PP), is leading a minority government after a 10-month political impasse that lasted from December 2015 to October 2016.

Spain held general elections in 2015 and 2016. Rajoy was only able to secure the premiership after the centre-left Socialist party abstained from voting.

Rajoy’s PP has been losing popularity to the centre-right Citizens party, who has taken a hardline stance on Catalan independence.

Similarly, Puigdemont’s centrist Catalan European Democratic Party (CDP) is the strongest party in the Together for Yes coalition, which leads a minority government in the Catalan parliament.

Puigdemont became president with the support of CUP, which is staunchly pro-independence.

“Of the several possible scenarios next week, the withdrawal of support for [Puigdemont] by the CUP for [his] ‘procrastination’ is one. This would mean new regional elections and a rise in votes for the CUP,” Balfour said.

Both leaders are fighting for their political survival.

“Neither is in a position to give way,” Balfour concluded.

So, who is in the better position?

“I think Rajoy feels strong both in terms of support from the EU’s larger states and lack of opposition,” said Josep Costa, a professor of political theory at Barcelona’s Universitat Pompeu Fabra, in an interview with Al Jazeera.

Although European leaders have publicly criticised the police response to the referendum, a spokesperson for the European Commission, the EU’s executive organ, said in a statement: “The commission only has the powers which are given to it and when it comes to this position we have a position which goes back to 2004 … we must respect the constitutional order and the legal framework of each member state.”

According to the Spanish constitution, no autonomous community has the right to self-determination. Respecting Spain’s “legal framework” would block Catalonia’s national aspirations.

Similarly, the socialist opposition announced a motion against “police violence and then it did not materialise,” the professor continued. Their leader, Pedro Sanchez, also said the referendum “has perverted the concept of democracy,” signalling his opposition to Catalan secession.

Costa also said he believes Rajoy “interpreted the Catalan government’s offer to negotiate as a signal of weakness”.

Doing anything other than declaring independence “would be to endorse each and every one of [the Spanish government’s] threats, contempt and repression, and would mean returning to the Spanish constitutional legality,” their letter to Puigdemont states. 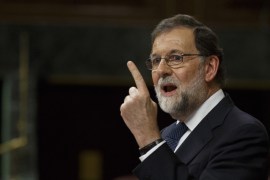