Cox’s Bazar, Bangladesh – I was born in the same year you were awarded your coveted Nobel Peace Prize.

It was one of the greatest honours to be bestowed upon someone from our country.

Everyone in Maungdaw, the area in Rakhine State where I am from, was filled with joy, and rejoiced your award as if it were their own.

For the first time since independence, we – the Rohingya – felt as though we were a part of this country. We were proud to call ourselves Myanmarese.

After suffering years of abuse at the hands of the military junta, your peace prize inspired us, a people who have suffered decades of oppression.

Growing up, my grandfather always spoke highly of you. He would choose the biggest goats and cows to slaughter when members of your party, the National League for Democracy, would visit. He would graciously welcome them.

My father and my beloved grandpa wanted me to follow the path you had chosen, and my mother was drawn to you by your powerful voice and activism.

In 2010, when you were finally released by the military from house arrest, we rejoiced. But seven years on, we, the Rohingya, remain victims of a brutal and genocidal state. This time, at your hands.

Since your general election victory in 2015, you pushed out Muslim representatives from your party. It was the first sign of your political cowardice.

A few months later, your administration launched “clearance operations” in northern Rakhine State. During those months, countless civilians were killed and women were gang-raped.

Despite widespread international condemnation, you denied the crimes.

You even refused to refer to us as “Rohingya”, an accurate term that represents the ethnicity of my people – a people who have been living in Rakhine for centuries.

Since the start of the violence on August 25, more than 500,000 Rohingya have fled to neighbouring Bangladesh.

Over 1,000 Rohingya villagers have been killed, 15,000 homes have been burned down, and those that have remained are trapped in fear and desperation.

On September 1, my parents and I were forced to leave our home.

After three days and two nights, we reached Bangladesh after crossing the Naf river on a small rowing boat. We later found shelter at the Kutupalong refugee camp.

I just received information that my home was burned to the ground. While many will say it was the army or vigilantes that burned it down, I feel as if it is you – Aung San Suu Kyi – that is to blame.

Not only did you burn down my home, you also burned my books.

I had always dreamed of becoming an author, studying English at Sittwe University, but as you know, the Rohingya are banned from enrolling or studying there, so I sought inspiration from books and articles.

You burned Nelson Mandela’s Long Walk to Freedom. You burned Mahatma Gandhi’s Autobiography. You burned Leymah Gbowee’s Mighty Be Our Power. And you burned your own book, Freedom from Fear.

You are the one who is responsible for setting my hopes and dreams on fire.

And now, as we stand here in Bangladesh as refugees, my father has a question for you: “Why have you never visited the Rohingya, whether in Rakhine State or those forced to Cox’s Bazar after everything that has happened?”

Do you even care about our situation?

You’ve chosen your path, that’s clear for everyone to see. Now your name will be synonymous for the millions of Rohingya displaced around the world with the countless tyrants and dictators that have come before you. 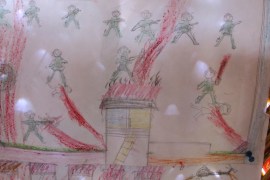 The mental health toll of the Rohingya crisis

As mental health workers deal with the immediate manifestations of trauma, they fear the longer-term implications. 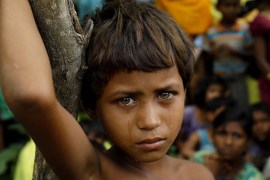 Letter from a Rohingya: We are facing extinction

A resident of Myanmar’s Rakhine State discusses daily life and the abuses and attacks Rohingya endure.