ISIL is on the verge of defeat in Syria’s Raqqa and the city may finally be cleared of the group’s fighters on Saturday or Sunday, the Syrian Kurdish YPG militia said.

“The battles are continuing in Raqqa city. Daesh (Islamic State of Iraq and the Levant) is on the verge of being finished. Today or tomorrow the city may be liberated,” YPG spokesman Nouri Mahmoud told Reuters news agency by telephone.

The YPG dominates the US-backed Syrian Democratic Forces (SDF), an alliance of Arab and Kurdish militias that has been battling since June to defeat ISIL at Raqqa, which served as the group’s de facto capital in Syria.

Al Jazeera’s Hashem Ahelbarra, reporting from Antakya in Turkey, said only about seven percent of the city was still under control of ISIL on Saturday.

“Thousands of people have been trapped in those areas. Many are now being evacuated, with thousands ending up in refugee camps. These camps lack basic infrastructure and services, and a cold winter is just a few weeks ahead,” Ahelbarra said.

“It’s a very difficult situation for so many.”

An activist group that reports on Raqqa, Raqqa Is Being Slaughtered Silently, said on its Facebook page on Saturday that dozens of buses had entered Raqqa city overnight, having travelled from the northern Raqqa countryside.

The Observatory said the evacuation was taking place according to a deal reached between the SDF and the US-led coalition on the one hand, and ISIL on the other.

During the more than six-year Syrian war, the arrival of buses in a conflict zone has often signalled an evacuation of fighters and civilians.

A spokesman for the US-led coalition against ISIL told Reuters on Saturday that around 100 ISIL fighters surrendered in Raqqa in the last 24 hours and were “removed from the city”.

“We still expect difficult fighting in the days ahead and will not set a time for when we think [ISIL] will be completely defeated in Raqqa,” Colonel Ryan Dillon said in an emailed statement

In August, ISIL fighters agreed to be evacuated from a Lebanon-Syria border area, the first time the fighters had publicly agreed to a forced evacuation from territory they held in Syria.

Civilians have been making perilous journeys to escape ISIL-held areas as SDF forces advance. The SDF says it helps transport them away from the fighting after they flee. 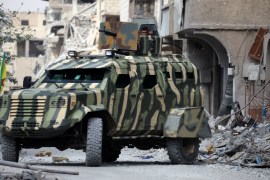 US-backed rebels tell Al Jazeera they will launch their campaign on Sunday to capture northern Syrian city from ISIL. 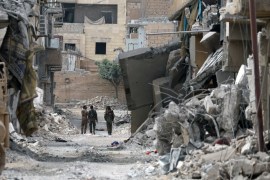 As battle for ISIL-held Raqqa enters its final stages, those on the ground lament civilian casualties.