US President Donald Trump is expected to refuse to certify Iran’s compliance with the landmark 2015 nuclear deal, an agreement between world powers and Tehran aimed at limiting the latter’s nuclear programme to non-military purposes.

The move comes despite thinly-veiled criticisms from US allies in Europe who have developed burgeoning commercial and political ties with Iran.

Trump is to lay out his plan in a 16:45 GMT speech at the White House on Friday.

Trump’s withdrawal of endorsement would mean US legislators could vote to introduce new sanctions against Iran, which Iranian leaders say could lead to their country’s partial or complete withdrawal from the deal.

Al Jazeera answers some of the most important questions regarding the Iran deal, formally known as the Joint Comprehensive Plan of Action (JCPOA), and Trump’s expected decision.

Often abbreviated to “the Iran deal” or “Iran nuclear deal”, JCPOA is an agreement between Iran and the five permanent members of the UN Security Council plus Germany and the European Union to ensure its nuclear programme is limited to civilian use.

The deal, which was signed in October 2015 and implemented at the start of 2016, followed years of negotiation between the US, represented by then-Secretary of State John Kerry, and Iran, represented by Foreign Minister Mohammad Javad Zarif.

The material in its high-enriched form is required to produce nuclear weapons. Iran denies that it has ever had the aim of producing a nuclear weapon.

Iran also agreed to reduce the number of centrifuges capable of enriching uranium.

In return, UN sanctions related to Iran’s nuclear programme were lifted, as were some EU sanctions.

The US ended some secondary sanctions against non-US businesses and individuals who engaged in commercial activity with Iran.

Frozen Iranian assets, valued at over $100bn, were also released to Tehran.

Who ensures Iran abides by its side of the deal?

Why does Trump need to certify Iran’s compliance with JCPOA?

The Obama administration faced heavy criticism from Republicans, as well as from some members of his own Democratic Party for signing on to the deal, which they saw as excessively compromising.

Opponents of the then-US president passed legislation requiring US presidents to certify Iran’s compliance with the deal every 90 days.

The Trump administration declared that Iran is complying with the nuclear deal in May and July, but threatened more sanctions for breaching the “spirit’ of the agreement.

The deadline for certification is October 15, but it is believed that Trump will announce his decision sooner.

White House spokeswoman Sarah Sanders said this week that the president “has reached a decision on an overall Iran strategy”.

Trump had repeatedly called the agreement the “worst deal ever” and had promised to tear it up even before he was elected.

What will happen if Trump refuses to certify the Iran nuclear deal?

If Trump refuses to certify, the issue goes to Congress.

Legislators will have a non-binding 60 day period to debate the deal.

Congress can decide to introduce or restore sanctions.

It remains to be seen whether that will happen as several prominent Republicans are undecided on the issue or do not want the deal to unravel.

Would Trump be violating the nuclear deal?

Not certifying the deal would not be a violation of JCPOA in itself. However, it does pave the way for Congress to introduce new sanctions, which could be in breach of US commitments under the agreement.

The onus on breaching the deal would, therefore, be with US legislators.

Would it be easy to introduce new sanctions?

While opposition to the Iran deal as it stands is strong, any attempt to scrap it would face resistance from members of the minority Democratic Party, as well as some Republicans, such as Senator Lindsay Graham, who has called on Trump to renegotiate parts of the agreement instead of scrapping it entirely.

How has Iran reacted?

Foreign Minister Zarif has threatened to partially or fully withdraw from the deal in the event of new US sanctions on Tehran.

Analysts say hardliners in Iran will be empowered by any US violation of the deal and would use it as an opportunity to block any further rapprochement with Washington.

“If anything Iran has gone out of its way to show it is compliant with the nuclear deal but what it will do is put pressure on the European countries to stand up for the deal for them to keep up with their part of the bargain,” Durham University’s Professor Anoush Ehteshami told Al Jazeera.

How have US allies reacted?

European leaders have taken the unusual step of publicly calling on the US to abide by the deal and have affirmed that Iran is upholding its commitments under JCPOA.

On Friday, the British embassy in Washington, DC, took the unusual step of posting an animation on Twitter showing how Iran was complying with the deal.

French President Emmanuel Macron has told the US that not honouring its side of the deal could push Iran into producing a nuclear weapon in the future.

European states have enjoyed burgeoning trade ties with Iran since the deal came into force and experts say US breaches of the deal would damage its reputation as a reliable partner.

“Europe and the rest of the world would perceive the US as an international troublemaker and unreliable partner,” Arshin Adib-Moghaddam of the School of African and Oriental Studies said.

What other sanctions has the US placed on Iran?

As recently as last July, the US imposed sanctions on 18 Iranian individuals and entities for supporting what it said was “transnational criminal activity”.

Sanctions related to Iran’s ballistic missile programme, its activities in other countries and its alleged ties to proscribed groups remain unaffected by JCPOA. 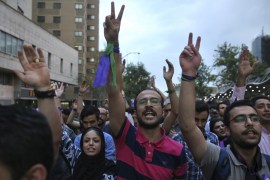 Iranians worry US decision to tear up nuclear deal will embolden hardliners and lead the country to armed hostilities. 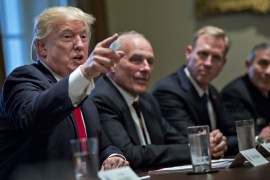 Trump: Iran has not lived up to spirit of nuclear deal

US president says ‘Iran’s aggression’ must be stopped, as reports suggest he may decertify landmark nuclear agreement.