Iranian President Hassan Rouhani has hit back at his US counterpart, Donald Trump, over his aggressive new strategy towards Iran, saying Tehran will remain committed to a multinational nuclear deal as long at it serves its national interests.

Rouhani’s remarks came in response to a speech by Trump earlier on Friday in which the US president “decertified” his backing for the landmark deal – also signed in 2015 by Britain, France, Russia, Germany and the European Union – and left its fate in the hands of Congress.

“What was heard today was nothing but the repetition of baseless accusations and swear words that they have repeated for years,” Rouhani said in a televised address from Tehran.

“The Iranian nation does not expect anything else from you,” he added.

Rouhani called the deal not renegotiable, adding that Trump’s decision to not certify it would isolate the US as other signatories of the accord remained committed to it.

READ MORE: What you need to know about Trump and the Iran deal

“Today, the United States is more than ever isolated in its opposition to the nuclear deal and in its plots against the Iranian people,” Rouhani said, dismissing Trump’s threat to tear up the deal if Congress does not impose tough new sanctions on Iran.

“Apparently, he doesn’t know that this agreement is not a bilateral agreement solely between Iran and the United States.”

‘Will never bow to foreign pressure’

In his speech, Trump accused Iran of destabilising activities in the region and called for tougher sanctions against its elite military wing, the Islamic Revolutionary Guards Corps (IRGC). The US president also called on allies to help impose sanctions that would target Tehran’s ballistic missile programme.

Rouhani responded to Trump’s allegations with his own catalogue of US misdemeanours, starting with the CIA’s involvement in a 1953 coup, which toppled Iran’s democratically elected government.

He criticised US involvement in wars from Vietnam to Afghanistan and Iraq, and highlighted the shooting down by a US naval vessel of an Iran Air passenger flight in 1988, which killed 290 people.

Rouhani also attacked Trump’s characterisation of the IRGC as a corrupt organisation propping up a “fanatical regime”.

“Is the Iranian government a dictatorship … or is it the governments who are supported by the United States and still run their country on a tribal basis and have never seen an election in their country?” Rouhani said in a pointed reference to Iran’s regional rival, Saudi Arabia.

Despite Trump’s aggressive rhetoric, Rouhani said Iran remained committed to the nuclear agreement for the time being.

“We respect the JCPOA … so long as it remains in keeping with our national rights and interests,” he said, using its technical name, adding that Iran’s ballistic missile programme will expand despite pressure from the US.

“The Iranian nation has not and will never bow to any foreign pressure,” said Rouhani, adding that the IRGC “will continue its fight against regional terrorists”.

Al Jazeera’s Zein Basravi, reporting from Tehran, described Rouhani’s response as “strong and swift” with a “tone that was meant to match the aggressive” rhetoric coming from the White House.

“He said that Trump was in need of a history lesson and then proceeded to give him one,” said Basravi.

“Rouhani also put out a very strong case for why Iran says it needs to have a defensive programme for itself; it says part of that programme is definitely its ballistic missiles that are meant for regional security and not for any sort of nuclear purposes,” he added.

“Rouhani’s message is clear that Iran’s problems are its own to solve and it will do what it feels necessary to secure its security and sovereignty.”

Iran’s foreign ministry also issued a statement in response to Trump’s speech, citing the repeated confirmations by the IAEA, the UN nuclear watchdog, that Tehran was complying with its obligations under the deal.

“The claim by the president of United States regarding Iran’s non-compliance has no international relevance or credibility, since the IAEA, as the sole authority to conduct such monitoring and verification, has repeatedly confirmed Iran’s full compliance with its commitments,” the ministry said.

“This proves once again that the United States is not a reliable negotiating partner.” 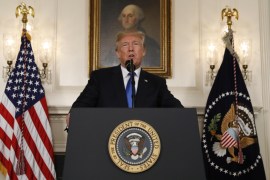 Congress has 60 days to decide whether to restore sanctions on Iran, a move that could unravel historic nuclear accord. 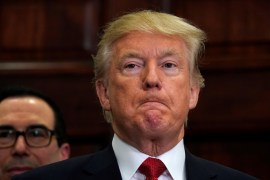 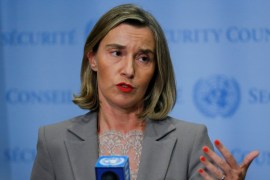 EU foreign policy chief defends landmark 2015 accord, shortly after US president announces decision to decertify it.