Police in western Kenya shot dead two opposition protesters who allegedly threw rocks at a police station, while officers used tear gas on rallies in the capital and elsewhere demanding reforms in advance of a looming presidential vote rerun.

In the town of Bondo, the rural home of opposition leader Raila Odinga, a large crowd on Friday confronted officers outside the police station, scattering as live shots were fired.

Witnesses told AFP news agency two people were shot dead. “One person had his head shattered by a bullet while the other was hit on the chest,” said witness Sam Oguma.

Three other protesters had gunshot wounds in the confrontation in the Odinga stronghold of Siaya County, Paul Kiarie, Bondo police chief, said.

The opposition says banning these protests is unconstitutional and they want to continue demanding electoral changes from the electoral body.

The government on Thursday banned the protests because of “imminent danger of breach of peace”.

Human rights groups protested, with some pointing out that police have killed at least 37 people in demonstrations since the results of the August election were announced.

Kenya’s Supreme Court nullified that vote, citing procedural irregularities and voiding the victory of President Uhuru Kenyatta. The ruling opened the way to a repeat vote on October 26.

But opposition leader Raila Odinga has refused to take part, saying the rerun should not happen until wide-ranging reforms are brought in to prevent another failed vote.

The election board has said the polls will go ahead anyway, pitting Kenyatta against six other candidates, none of whom polled more than one percent in August.

Odinga told Reuters news agency that he might consider returning to the Supreme Court for clarification on whether the October 26 poll was legal.

“As far as we are concerned, that (original Supreme Court) ruling is still valid,” Odinga said during a visit to Britain’s capital, London.

“What we are demanding is that the electoral commission should respect the Supreme Court and carry out elections in accordance with the ruling.”

He supported protesters’ right to demonstrate, he said, but has so far stopped short of calling people onto the streets himself.

Demonstrations banned in the central business districts of Nairobi, Mombasa and the opposition stronghold of Kisumu. 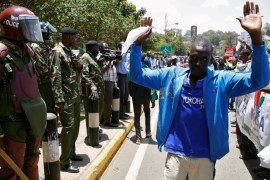 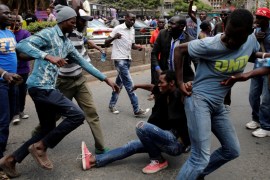