Kenyan police have fired tear gas at opposition protesters a day after their leader Raila Odinga announced his withdrawal from the presidential race, saying he does not expect it to be free and fair.

His supporters are unhappy at a new election law and fear it could lead to a walkover victory for incumbent President Uhuru Kenyatta, in the rerun of the election later this month.

Election officials have been locked in crisis meetings since Odinga’s decision, as debate rages over what his move could mean for an election after President Uhuru Kenyatta’s August 8 victory was annulled by the Supreme Court.

Protests have been taking place almost daily since the decision in a country that still has grim memories of post-election violence when a disputed 2007 poll prompted politically motivated tribal clashes that left some 1,100 dead.

There is widespread anger, however, after parliament on Wednesday passed the new law, which says if one candidate withdraws, the other automatically wins the presidency.

The law was one of the several changes approved by parliament – dominated by Kenyatta’s ruling Jubilee party – on Wednesday that Odinga says will make the “irregularities” cited by the Supreme Court legal.

Announcing his withdrawal on Tuesday, Odinga said: “All indications are that the election scheduled for 26 October will be worse than the previous one.”

Kenyatta, for his part, insists that the election rerun must go ahead.

Odinga has demanded deep reforms that the election commission (IEBC) says are impossible to deliver in the constitutionally mandated period.

He says his withdrawal legally forces election officials to begin the entire process from scratch – a move that leaves more time for his reform demands to be met.

However, IEBC said on Wednesday it had not received formal notice of his withdrawal and regarded all original candidates as still in the fray.

In Odinga’s western stronghold of Kisumu, thousands of protesters on Wednesday blocked roads, set tyres alight and engaged in running battles with police.

However, the crowd later dispersed peacefully after speeches from opposition leaders, helped along by the first heavy rainfall of the season.

In another related development, Kenya’s High Court on Wednesday ruled that a third presidential candidate, Ekuru Aukot of the Thirdway Alliance, who scored less than one percent of the vote in the annulled election, should be allowed on the ballot.

However, the Supreme Court has previously ruled that only the petitioner and respondent in the case challenging the election outcome should stand in a rerun, and this decision is likely to stand.

Kenya’s Supreme Court last month annulled the August election citing widespread irregularities in the counting process and mismanagement by election officials and called for a rerun within 60 days.

The decision was held up as an opportunity to deepen Kenyan democracy. However, the process quickly turned sour, with attacks by Kenyatta on the judiciary.

Political violence immediately following the August election left 37 people dead, mostly at the hands of police, according to a Kenyan rights group.

Odinga is counting on a ruling by the Supreme Court after the 2013 elections – in which he failed to have the result overturned – which sought to clarify what happens if an election is invalidated.

That judgement stated that if a candidate dies or withdraws from the fresh election, the IEBC must begin presidential nominations from scratch.

Incidentally, the electoral-law changes approved by Kenya’s parliament on Wednesday will allow manual vote counting to supersede electronically transmitted results and make tally forms count even if there is “a deviation from the requirements of the form”. 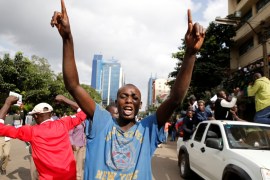 How will Kenya avoid another cycle of violence?

Opposition has been staging angry protests across Kenya, calling for reform of body that oversees elections. 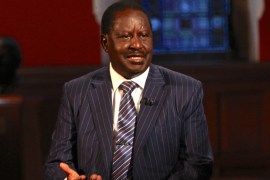