Durban, South Africa – Selva George says she is lucky to be alive. When the storm began early on Tuesday afternoon, it brought with it torrential rains and gale force winds, that pulled roofs off homes, demolished churches and turned roads into sinkholes.

Selva, a resident of Isipingo, some 19km south of Durban, found herself shielding her face when ferocious winds shattered her windows, sending shards of glass across her flat.

“I was praying to God, that if I have sinned, to forgive me and to put an end to this trauma,” George says, her eyes moist, and her hands trembling as she speaks.

“I lay on the ground and tried to escape the falling glasses that started flying in all directions.”

George survived, and her home like so many in Isipingo and other parts of KZN was severely damaged in a storm that has killed at least eight people and injured scores of others. But she knows that others lost everything.

The rains, measuring around up to 108mm south of Durban, flooded highways and washed away roads.

Barely two kilometres from her home, in the informal settlement known as “Uganda”, women and children were forced to sleep in toilets or in the open, as the winds tore down their homes made of wood, plastic and metal sheeting. Here, uprooted trees flattened the homes known as “shacks”, and if homes were spared, the rain washed away valuables.

On Wednesday, hundreds of people could be seen picking through streams and canals, in search of shoes, clothes, furniture that has been taken by the floods.

Many were also rendered homeless.

“All our belongings were washed away and the furniture got destroyed. I had to sleep at my neighbour’s house because mine had completely went down,” said Nonkanyiso Simkani, 43, a resident of Uganda settlement.

Simkani told Al Jazeera she was in bed when felt her home, built on the crest of a hill, begin to slide.

“What I witnessed yesterday was horrific … People were running around trying to save their belongings, but the wind and rain were blowing hard. As shack-dwellers, we have it really hard, whenever storms hit the city it’s us who get affected the most,” she said.

Another resident, Sibusiso Ntanzi, 33, told Al Jazeera that a large tree had fallen on his home and flattened it. He was forced to sleep outside.

“It’s been 11 years of this type of pain and when we demand houses we are told to wait,” Ntanzi said. “Are they waiting for someone to die before they take us seriously?”

The provincial government said in a statement on Wednesday that it was still assessing the impact of the storm and cost to life and infrastructure. At least five hospitals and 42 schools suffered partial damage.

Likewise, the Durban municipality said that road closures, hazardous driving conditions and rains made it dangerous and difficult for technical staff to attend to hundreds of problems across the city.

But it was too early to declare the area a disaster zone, the government said. On Thursday, the premier of KZN, Willies Mchunu is scheduled to meet families who suffered losses due to the storm, officials said. 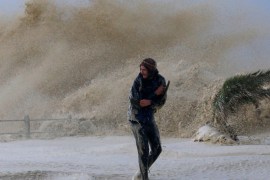 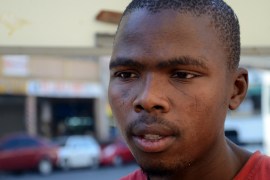 South African police evict homeless people ahead of AIDS summit, including HIV patient who lost his ARVs in the process.