Wildfires are a fact of life in California. At the end of a long, hot, dry summer, vegetation is tinder dry.

Thunderstorms, camp fires and arson all contribute to the starting of fires across the state. But the worst of these fires usually occur in September and October as this is the time of year when strong winds are most likely.

These winds are known as katabatic winds. Katabatic derives from the Greek word “katabasis” which means descending.

These winds are the result of cool, dense air from a higher elevation descending due to gravity.

In extreme cases, katabatic winds can reach hurricane strength, but more typically they are less than 20km per hour (km/h).

This particular wind, which has been fanning the flames in Northern California, is known as the Santa Ana wind in the south of the state, and the Diablo in the north.

The Santa Ana begins as a high-pressure system settles over the Great Basin.

Winds blowing around the “high” descend towards the coastal strip, having been warmed and dried by its descent off the plateau.

At the same time, these winds are driven through the Traverse Range which separates the coast of Southern California from the desert.

The air, taking the path of least resistance, is driven through gorges and canyons, thereby increasing the wind speeds close to gale force.

The combination of dry vegetation and strong dry winds can result in wildfires which can spread at a dramatic rate.

Severe “firestorms” occurred in 2007 and 2003, with the worst such storm, fanned by a diablo, hitting Oakland and Berkeley in 1991. 25 people were killed and 2,900 structures destroyed.

Katabatic winds are present in many other parts of the world. The cold air which builds up over the interior plateaus of Greenland and Antarctica results in some of the strongest winds anywhere on Earth.

Winds of 300km/h in some of the valleys of Antarctica are enough to scour them free of ice and snow.
Similar winds exist in Alaska and the Fuegian Archipelago of South America.

Here, the katabatic is known as a “williwaw” and winds of 220km/h are not unusual.

The Bora wind is another katabatic, which blows from the north or northeast in the Adriatic Sea. This largely winter wind can reach speeds of 200km/h.

Why no mention of the Fohn of Chinook winds?

Well, these winds do have a gravity component, but they are what is known as “rain shadow winds”; air is driven up one side of a hill or mountain range, where it drops its moisture as rain or snow, and then descends on the leeward considerably warmer and drier.

The current Santa Ana winds across Southern California look to be easing as a cold front moving in from the west helps to displace the area of high pressure around which the winds are flowing.

Hopefully, this change in weather conditions will help firefighter gain the upper hand in their battle with the wildfires. 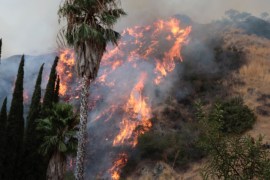 Hundreds evacuate as wildfire that has already burned more than 2,000 hectares threatens homes.