The Indian Supreme Court has ruled that sexual intercourse with a wife between the age of 15 and 18 years is a crime.

In a landmark ruling on Wednesday, India’s top court amended the country’s rape law and declared that sex with an underage wife illegal under India’s Penal Code (IPC).

The wife must file a complaint against her husband within a year of the committed offence.

“The exception in rape law under the IPC is contrary to other statutes, violates bodily integrity of girl child,” the court in the capital, New Dehli, said.

The verdict will come into effect for future instances and have no bearing on marriages already solemnised, the court said.

The legal age for marriage in India is 18, but child marriages, are not uncommon, especially in the rural parts of the country.

The Protection of Children from Sexual Offences Act (POCSO) considers sex with a person under the age of 18 as rape.

However, the law had an exception clause that said a man was not guilty of rape if he had consensual sex with a wife who was above the age of 15.

After hearing a petition by NGO Independent Thought, the Supreme Court ruled on Wednesday that the age of consent was 18.

Women’s rights activists in the country hailed the ruling as a “positive step in the right direction” and a possible “deterrent for child marriages”.

“We strongly feel that this decision of the Supreme Court will work in impacting child marriages, also,” J agmati Sangwan, women’s activist and member of the All India Democratic Women’s Association (AIDWA), told Al Jazeera.

Flavia Agnes, women’s rights lawyer and founder of the NGO Majlis, called the verdict a “big milestone”, but questioned its practicality.

“It has to be implemented only if the wife files a complaint,” she said. “The state on its own cannot implement it without a victim being there.”

The Supreme Court on Wednesday urged the government to take proactive measures to curb child marriage across the country.

India has the highest number of child brides in the world at more than 26 million, according to the UN’s children agency, UNICEF.

Sangwan believes the order will encourage child brides to “speak up, resist and rebel”.

Agnes, however, said the ruling empowers women “in a limited manner” and more measures need to be taken to put an end to child marriage in the country.

“The steps are not only from the legal side,” she explained on the phone. “It has to be socioeconomic, literacy rate has to go up, empowerment must happen, economic standards must rise and education should be available for girls beyond the primary level. Only then can child marriage be prevented.”

The order also comes at a time when there is increasing pressure from petitioners to criminalise marital rape.

Before Wednesday, there was no crime in the country’s law about rape taking place under wedlock.

“That’s a different campaign (marital rape), which has already been launched and this judgement will surely help,” said Agnes.

Sangwan said the verdict will encourage the issue of marital rape to be seen in a “more humanitarian and democratic perspective”.

“This ruling will create a positive environment for the debate and discussion around marital rape,” she said.

In another partial victory for Indian women in August, the country’s Supreme Court suspended the “triple talaq” or instant divorce, practised by some in the Muslim community. 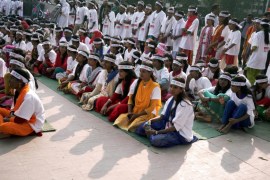 The dangers of the new child marriage law in Bangladesh

This law has unimaginable impact and has the ability to change the future of millions of girls in our country.