Damaging winds, destructive hail and torrential rain affected many parts of the country on Monday, with the area in and around Johannesburg seeing some of the worst damage.

Those who died were killed in traffic incidents attributed to the storms, according to South African News network News24.

Among those injured were a man and his two children, who were wounded after their house collapsed in Bapsfontein, to the east of Johannesburg.

Two other people were hurt when an external structure at the Cradlestone Mall in Krugersdorp collapsed.

There were numerous reports of hail smashing windows and damaging cars, and torrential rain flooding roads, making them impassable.

A suspected twister injured six people in the small town of Delmas, east of Johannesburg.

The severe weather brought heavy snow to Drakensberg. Residents reported that 50cm of snow had already accumulated on the ground in the northern parts of the Eastern Cape.

The severe weather has now cleared from Johannesburg, but it is still affecting other parts of South Africa.

The severe weather should come to an end on Wednesday. 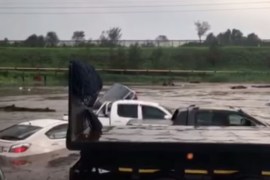