Almost exactly two years after it was signed, the Joint Comprehensive Plan of Action (JCPOA) signed between Iran and the five permanent UN Security Council members plus Germany and the EU is at risk of falling apart.

US President Donald Trump has called the agreement “the worst deal ever” and is expected to withdraw his support for it within days.

The deal, which is aimed at ensuring Iran’s nuclear programme is used exclusively for civilian purposes, requires Iran to reduce its capacity to produce nuclear weapons by drastically lowering its stockpiles of enriched uranium and removing centrifuges capable of enriching the metal.

In return for complying with the restrictions, UN sanctions on the country were lifted, billions of dollars in frozen assets were released, and the US ended some secondary sanctions on Tehran related to its nuclear programme.

Iran’s compliance with the deal, which was enshrined in UN Resolution 2231, would be ensured by the International Atomic Energy Agency (IAEA).

The deal was the end result of years of diplomatic wrangling between the Obama administration, represented by former Secretary of State John Kerry, and the government of Iran’s reformist leaning President Hassan Rouhani and his lead diplomat, Iranian Foreign Minister Jawad Zarif.

Opponents of the deal in Tehran and Washington voiced anger at what they saw as excessive compromise and in the US, Congress passed a law requiring the president to certify every 90 days that Iran was keeping up with its end of the deal.

That process of certification is the crux of the current crisis, Trump’s threat to withdraw endorsement paves the way for new sanctions on Iran, and Tehran has threatened partial or complete withdrawal from the agreement in response.

“Should the US Administration decide not to certify that Iran was in compliance with the terms of the agreement, US Congress would then have the option of imposing new US sanctions, or of restoring US sanctions waived under the JCPOA in whole or in part,” explained Professor Jonathan Brewer of the Department of War Studies at Kings College London.

“The Europeans, at least, will be lobbying the administration to continue to certify that Iran is complying with the deal, ” he said, adding European diplomats would also be tasked with trying to ensure Iran does not withdraw from the agreement should their efforts with the US fail.

The Iran nuclear deal is working. Here's how. pic.twitter.com/UxlYfWoqsW

“Maintaining commercial exchanges will also become more problematic for European companies if the US re-imposes secondary sanctions suspended under the JCPOA,” he said.

A September 2017 article by US outlet, Quartz, highlighted the risks to US and European manufacturers, such as Boeing and Airbus, which penned deals with Iranian carriers to supply hundreds of aircraft after restrictions were lifted. Up to $32bn worth of contracts are at risk.

The consequences of the Iran deal falling apart are not limited to Europe’s burgeoning ties with Iran, but could also reinforce the perception of the US as an unreliable actor in global politics since Trump’s ascension to the presidency.

The US president has adopted a shoot-from-the-hip diplomatic style by threatening to invoice Mexico for the cost of building a wall of their shared border.

“Ultimately, Europe and the rest of the world would perceive the US as an international trouble maker and unreliable partner,” said Arshin Adib-Moghaddam, the chair of the Centre for Iranian Studies at London’s School of African and Oriental Studies.

“Iran would share this view and prevent any diplomatic initiative that would include the Trump administration,” he added.

Failing to certify Iran’s compliance with the agreement would also affirm criticisms of JCPOA by conservative opponents of President Rouhani, according to Professor Anoush Ehteshami of Durham University.

will find it increasingly difficult to balance the interests of the hardliners at home and the broader interests of his voters who want the deal to survive and want to see sanctions removed in their entirety so they can travel.”]

“Rouhani’s position will be difficult because of the perception the Americans are untrustworthy,” he said, adding that prevailing opinion in Iran is that the “deal is not going to survive because the Americans are not playing by the rules agreed”.

“Khameini will say that we should never have trusted the Americans all along, it will be a fulfilled prophecy as far as the conservatives are concerned and pressure will mount on Rouhani to respond and retaliate somehow.

“[Rouhani] will find it increasingly difficult to balance the interests of the hardliners at home and the broader interests of his voters who want the deal to survive and want to see sanctions removed in their country entirety so they can travel.”

For many observers, including Iran’s regional rivals, the initial signing of JCPOA between Iran and global powers, including the US, was widely seen as the first step in a rapproachment between Washington and Tehran.

Ehteshami, however, cautioned against the idea that the two states were ever that close to full normalisation under the previous US administration.

“I think normalisation would have had to take considerably longer than this, confidence building is a gestation process and it takes a while for both parties to build that confidence,” he said.

“I think it would have helped the process considerably if an Obama-like person was in the White House and had been able to continuously underpin the deal with a broadening of relations; social, cultural, economic, and eventually political,” he added, pointing out:

“I think relations are going to go back in the freezer.” 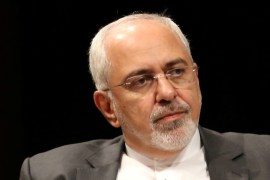 Iran’s Javad Zarif: ‘The US is addicted to sanctions’

Iranian Foreign Minister Zarif says Iran could withdraw from the nuclear deal in the event of US breaches. 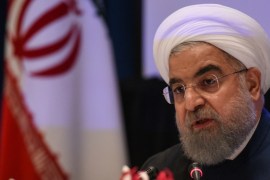 Rouhani: World will condemn US if it quits nuclear deal