Spain’s government insists the country will not be divided as pressure grows on the Catalan regional government after a massive march in Barcelona against secession.

Soraya Saenz de Santamaria, deputy prime minister of Spain, has issued a warning that the Madrid government will act on any Catalan declaration of secession.

She has labelled Carles Puigdemont, the Catalan regional president, a fanatic and is supported by Spain’s Socialist leader, Pedro Sanchez, who says his party will back the central government if it takes action.

Against this backdrop, Catalonia’s future looked uncertain on Monday, on the eve of a major parliamentary speech by Puigdemont, with little clarity as to whether he would stick with plans to declare secession from Spain.

Puigdemont is scheduled to speak on Tuesday at 6pm local time (16:00 GMT) “to report on the current political situation”.

He has been warned by a spokesman of Spain’s main ruling party that he risks arrest if he proceeds with secession.

“History should not be repeated,” said Pablo Casado of the People’s Party (PP).

Casado was referring to Lluis Companys, who proclaimed a short-lived Catalan state in 1934 and was arrested quickly after that. Six years later, he was executed by the government of Francisco Franco.

Besides arrest, Puigdemont risks prompting the Madrid government into triggering Article 155 of the constitution, which would allow it to take the unprecedented step of suspending Catalonia’s home-rule prerogatives.

“We will take the necessary measures to stop it. Catalonia’s secession will not happen, and the government will do all that is needed to make sure.”

According to sources within Puidgemont’s PDeCAT party, there are three possible scenarios: a full declaration of secession; a “symbolic” one, with no immediate effect; or no declaration at all, and a fresh call for dialogue with Madrid.

Catalonia held a disputed referendum on October 1 in which 90 percent of participating Catalans voted for secession.

However, turnout was only 43 percent as most unionists boycotted the ballot, and the Spanish Constitutional Court ruled the vote was illegal.

Rajoy’s government had repeatedly refused to grant Catalonia permission to hold a referendum on the grounds that it is unconstitutional, since it would only poll a portion of Spain’s 46 million residents.

Avid separatists want a declaration of independence on the basis of the October 1 referendum results.

However, after major banks and several firms moved their legal bases out of Catalonia, the Catalan business community is urging caution, fearing a major flight of capital.

There are also concerns about lack of international support for secession, and a pro-union march that attracted hundreds of thousands of people in Barcelona on Sunday was a stark reminder that not all of Catalonia is behind the plan.

But Puigdemont’s far-left ally, the CUP, is unlikely to accept any backing down.

The pro-independence Catalan National Assembly said two big screens would be placed near the parliament to follow the debate.

A pre-recorded interview in which Puigdemont presented the secession declaration as a done deal was edited before it was aired late on Sunday by the Catalan broadcaster TV3.

In an advance extract, Puigdemont said the declaration was “foreseen” by Catalan law, and “we will do what the law says”.

In the final version, he said he wanted negotiations with Madrid, and if that option is denied, “we will do what we came to do.”

Catalonia’s separatist camp has grown in recent years, strengthened by Spain’s recent economic crisis and by the central government’s rejection of attempts to increase self-rule in the region. 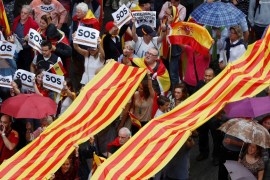 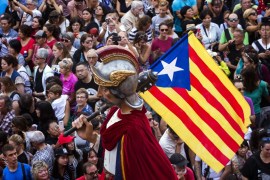