Spain could use constitutional powers to suspend Catalonia’s autonomy if it declares independence, Prime Minister Mariano Rajoy has warned.

“People here would be in agreement with what Rajoy has said. They very much feel that Catalonia is a part of that and so they’ve gathered a lot of nationalistic fervour here.

Even though this was organised by a centre-right political party and a civil organisation, there are elements of right-wing organisations and people with right-wing sympathies as well.

Crowds here have been calling for the Catalan President Carles Puigdemont to be put into prison. It just goes to show the level of anger that they have towards the president and the secessionist point of view.

The invoking of taking full control over Catalonia has been a topic that has been discussed quite recently. It’s not an automatic decision, they would have to follow a process where the Spanish government in Madrid would have to ask the Catalan president what he intends to do.

If he refuses to back down from the whole question of secession, then that’s when the Spanish government would go to the Senate to invoke those emergency control powers.

That would be just one element of a situation which has been really going up to the point of brinkmanship here.

Each side has been hardening and the people left in the middle of this, many of whom feel distraught at the way that this whole situation has exploded, feel very much that their voice hasn’t been heard.

They are the ones that are calling for dialogue and this is the voice that has been heeded by the mayor of Barcelona.

That dialogue has to be the way that this situation, this crisis needs to be resolved.”

Rajoy’s comments, published in El Pais newspaper, come as thousands gathered in Barcelona on Sunday to rally to call for Spanish unity.

“The government is going to ensure that any declaration of independence comes to nothing,” he told the newspaper.

Spain considers the referendum, which returned a 90 percent vote in favour of secession, to be illegal based on Spain’s 1978 constitution.

The Constitution states that the country is indivisible and gives the national government the exclusive power to hold referendums.

“This battle is going to be fought and is going to be won, because it is a fair battle, it’s a legal battle and it is what the immense majority of Spaniards want and what we all feel,” Rajoy said, adding more national police would be deployed in Catalonia until the situation returned to normal.

Sunday’s unity rally followed a similar demonstration in Madrid a day earlier to attempt the two sides to reach a resolution, in which thousands of people dressed in white and marched under the slogan: “Shall we talk?”

More than 2.3 million Catalans took part in the referendum – a turnout of 42 percent.

Catalan President Carles Puigdemont said the result meant the region had “won the right to have an independent state”.

Nearly 900 people were injured while attempting to vote, according to regional and national authorities. More than 400 police officers were also injured.

In the run-up to the referendum, Spanish authorities detained at least 14 Catalan officials.

Catalans previously voted in favour of independence in a non-binding referendum in 2014, with 80 percent in favour. 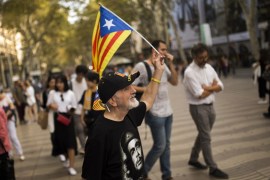 Is the Spanish media coverage serving the people or its political masters? Plus, the persecution of Vietnam’s bloggers. 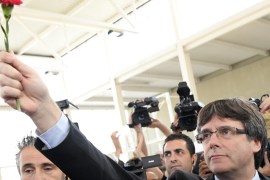 Who is Catalan President Carles Puigdemont?