Nate was downgraded to a tropical storm early Sunday as it moves farther inland over the US states of Mississippi and Alabama, the National Hurricane Center said.

The storm, which made a second landfall in Mississippi after first hitting Louisiana, was packing maximum sustained winds of 110km/h, and was moving north-northeast at 37km/h, the centre said.

“Nate is expected to continue to quickly weaken as it moves farther inland,” the Miami-based centre said in its latest bulletin.

Nate first hit land at the mouth of the Mississippi River, south of low-lying New Orleans in Louisiana, on Saturday evening as a Category 1 hurricane.

A hurricane warning was discontinued for the mouth of the Pearl River, which marks the Louisiana-Mississippi state border, to the Alabama-Florida border further east, the agency said.

READ MORE: Nate strengthens to hurricane as it nears US Gulf Coast

She did not give details on all the deaths, but said two women and a man who worked for the Ministry of Health were swept away by a flooded canal in the central municipality of Juigalpa. 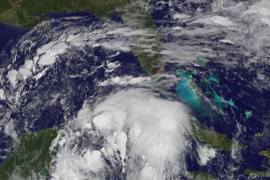 Nate strengthens to hurricane as it nears US Gulf Coast

Louisiana and Mississippi declare local state of emergency and order some people to evacuate coastal areas.