Children in the Democratic Republic of Congo are bearing the brunt of escalating violence between Congolese security forces and armed groups in the country.

Out of the 3,360 refugees who have fled into northern Zambia since August 30, at least 60 percent are children, according to the UN refugee agency (UNHCR).

After walking hundreds of kilometres alone for weeks, many are traumatised and show signs of malnutrition.

Despite the perilous journeys they endure, some say fleeing the country was their only option.

“My parents were both killed when the village was attacked,” Leon Musongo, a Congolese child refugee, told Al Jazeera. “The only thing I could do was run and leave the country.”

He added: “I was told Zambia is safe. Bad people won’t follow me here. I walked for a long time. I miss my parents, but at least I am alive and safe in Zambia.”

Most refugees are taken to the Kenani transit centre in the Nchelenge district, 90km from the border, where the Zambian government works with aid agencies to help them.

So far, 4,000 refugees have been registered at the refugee camp in northern Zambia.

Al Jazeera’s Haru Mutasa, reporting from Kamponge, said the centre is “filling up fast” and the “humanitarian needs are huge”.

“Some of the children who come alone wait in nearby villages, hoping their parents follow,” she said. “They can wait for days or weeks. Sometimes, they never hear from their families again.”

Meanwhile, dozens are making the journey alone. Others come with relatives because they got separated from their parents during the conflict.

According to UNHCR aid workers, the children have suffered a lot of trauma from the violence back home.

“You have children who have fled because they have lost their parents, and they saw their parents being killed,” UNHCR’s Anna Leer told Al Jazeera.

The UN’s children agency, UNICEF, said in July that the violence in Congo’s volatile Kasai region has displaced at least 850,000 children.

The number of people displaced by conflict in Congo has nearly doubled in the past six months to 3.8 million, a UN official said in August.

The UN released a report in August, saying more than 250 people, including 62 children, were killed in Congo from mid-March to mid-June.

In the southeastern province of Tanganyika, clashes between rival groups have also forced thousands to flee, as has the long-running violence in the Kivu region, according to the Norwegian Refugee Council, an NGO.

In Kasai, violence erupted last September after the death of a tribal leader, known as the Kamwina Nsapu, who rebelled against the authority of President Joseph Kabila‘s government in Kinshasa and its local representatives.

The killing sparked violence that has escalated, including alleged violations of human rights such as extrajudicial killings, rapes, torture and the use of child soldiers. 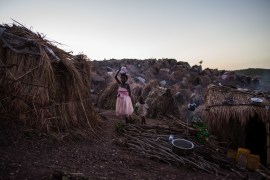 Half a million people have been displaced in Tanganyika, in southeastern Democratic Republic of Congo.