The Philippines’ top diplomat defended President Rodrigo Duterte’s deadly war on drugs, saying all those who were killed during police operations were criminal drug dealers, despite evidence to the contrary.

In an exclusive interview with Al Jazeera’s UpFront, Secretary of Foreign Affairs Alan Cayetano denied reports that the suspicious deaths of individuals in the country’s ongoing drug war are not being investigated.

Cayetano added that “every single one of them is being investigated”.

When asked if all the victims of the police’s anti-drug operations were, in fact, criminal drug dealers, Cayetano said: “Yes”.

Police and media, however, have documented several cases of individuals who were not involved in drugs being killed.

In August, a 17-year-old high school student was shot and killed by police. Witnesses said police officers forced the teen to hold a gun, fire and run.

Those close to the student, Kian Loyd delos Santos, said he was not a drug dealer or user. His case sparked rare public outrage over the country’s war on drugs.

In another incident in September 2016, a four-year-old girl on the Philippine island of Negros was killed when police fired at her father, a suspected drug dealer.

Family members denied that Althea Fhem Barbon’s father, Alrick, was a part of the drug trade. Both Alrick and his daughter died from bullet wounds.

In another incident, a man, who had been shot by police for allegedly selling drugs, told Al Jazeera that the evidence against him was planted.

The Philippines’ drug war, which was launched by the Duterte administration in mid-2016, has received intense backlash from the Catholic Church, human rights groups, and the international community.

Since Duterte took office, more than 13,000 people have been killed in the war on drugs, according to activists.

But the Duterte administration has disputed that number, saying only 3,451 “drug personalities” were killed during police operations from June 30, 2016, to July 26, 2017. More than 2,000 other cases are considered drug-related homicides by unknown assailants, while at least 8,200 other killings are “under investigation”, the government said.

Cayetano told Al Jazeera that the campaign had been misrepresented for political reasons.

“The perception that was thrown to the international community was led by certain human rights groups associated with our opposition, and associated with some people in the Catholic Church,” he said.

“But, they did not give the international community the correct facts.”

During the interview, Cayetano was asked if it was difficult to represent President Duterte, due to his controversial statements including rape jokes, calling the Pope a “son of a b****” and the US ambassador to the Philippines a “son of a w****”.

“Not at all,” he said. “Filipinos are prouder now than ever.”

He adds that those things are “being said by Western media, which the president did not say”.

In September of last year, Duterte directed profanities at UN Secretary-General Ban Ki-moon and US President Barack Obama after they made similar comments about the mounting death toll in the Philippines.

Duterte later apologised for calling Obama “a son of a w****”.

The interview with Cayetano will air on Friday at 19:30 GMT. You can always watch it online. 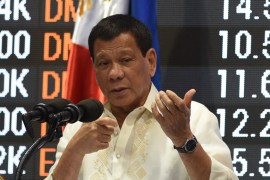 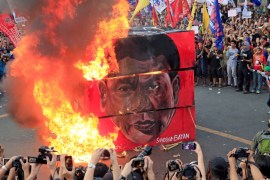