Hundreds of farmers in the state of Rajasthan, India, have been protesting against the government’s plan to acquire their land, with scores of them digging up holes and burying themselves as part of the protest.

Farmers have been holding the sit-in at Nindar village, about 20km from Jaipur, the state capital, for the past two weeks but adopted this unique method of protest on Monday – the birth anniversary of India’s independence leader Mahatma Gandhi.

Nagender Shekhawat, the leader of the protest, told Al Jazeera that “nearly 5,000 families, including farmers, are going to be affected by the acquisition”.

He added that the protesters have been occupying the land for the past 18 days. “Farmers have been protesting since the land acquisition notice was issued in 2010. They do not want to give up their land as they use it for agriculture and animals,” he said.

“Government wants to destroy their source of income. We oppose the government move.”

The protesters are against the acquisition of 1,350 bighas (540 acres) of land for a housing project, the Indian Express newspaper reported. They say the compensation offered is not enough.

“Our demand is that the compensation and acquisition should be done as per the new Land Acquisition Act,” Shekhawat said referring to the Act that has provision that requires consent from 80 percent of the residents of an area for acquisition.

Land is a scarce resource in India – home to 1.3 billion people. The government’s push for industrialisation and mega mining and developmental projects have displaced millions. The majority of them often have to wait for years to receive compensation.

A 2015 move by the government of Prime Minister Narendra Modi of the Bharatiya Janata Party (BJP) to amend the Land Acquisition Act was met with massive protests.

“In our meeting with Rajasthan Urban Development Minister Shrichand Kriplani, we reiterated our position that a new survey should be done,” Shekhawat said.

He said that approximately 1,000 families living in the 18 residential colonies would become homeless.

A 90-year-old protester told NDTV that her family lived there for generations.

“I have brought up my eight sons here in this land, and I have 20 grandchildren… if you take me away from my land where will I go? I don’t want the money I want my land,” Nanthi Bai said.

A legislator from the opposition Congress party accused the state government, also ruled by the BJP, of ignoring the suffering of the people.

“It is a pro-corporate government; it works for them. They do not care for the farmers,” Sukhram Bishnoi, member of Rajasthan state legislature, told Al Jazeera by phone.

But Raj Kumar, Deputy Commissioner of JDA, accused protest leaders of playing politics over the issue of development.

“Land acquisition process was started in 2010. The deal was finalised after proper compensation in May 2013. Farmers willfully surrendered about 300 bighas (120 acres) of land as part of the land-for-land compensation,” he said.

He told Al Jazeera that people with “vested interests” were behind the agitation that the protesters have called “zameen samadhi satyagraha” (land burial protest).

“People who live in the 5-6 illegal colonies on the land, and not farmers, are protesting. Maximum 600 families are participating in the protests. Farmers, who are not even 5-10 percent of this agitation, are being misguided.”

Another round of talks is slated to be held with the JDA commissioner at 6pm local time on Thursday.

“JDA and the [Rajasthan] state government is ready to talk to resolve the issue, but we must respect law,” Raj Kumar said.

“We are ready to re-examine the survey wherever there is some problem. We have followed due process, but if a land has been surveyed incorrectly, we are ready to rectify it.”

Successive governments in the past have been accused of ignoring the interests of farmers and favouring big businesses – an accusation corroborated by a report by the Comptroller and Auditor-General (CAG) of India that said the government had diverted land to private real estate developers.

Shekhawat insisted he will continue with the protest against the destruction of people’s homes.

“We do not want to give up the land.” 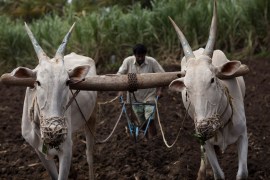 India’s sugarcane farmers: A cycle of debt and suicide

How rising debts, pesticides and erratic rainfall are pushing some farmers in southern India to suicide. 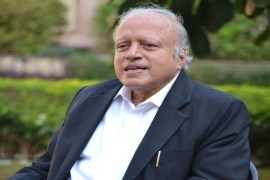 The pioneer of India’s Green Revolution talks about the issues facing the agriculture sector amid violent protests.