At least one suspected rebel has been killed and three soldiers have been wounded in Indian-administered Kashmir after fighters stormed a paramilitary base, according to police.

The attackers assaulted the heavily-guarded camp outside a regional airport in the area’s main city of Srinagar in the early hours of Tuesday, hurling grenades and spraying automatic gunfire.

The camp houses a battalion of India’s Border Security Force and only barbed wire separates it from the Srinagar airport, which is controlled and run by the Indian Air Force.

It has previously been a notorious interrogation centre where suspected rebels and their sympathisers would be detained, questioned and allegedly tortured.

Officials said the airport, which is on a plateau and encircled by military and paramilitary camps, was safe.

Residents in the neighbourhood said they heard dozens of blasts and intermittent gunfire was still ongoing.

Besides being a highly guarded security zone because of the location of the strategic airport, many top former bureaucrats, police officials and politicians have residences in the area.

Reinforcements of counterinsurgency police and paramilitary commandos rushed to the scene and armoured vehicles dotted the entire road leading to the airport.

No anti-India rebel group immediately commented on the fighting.

India and Pakistan each administer a portion of Kashmir, but both claim the territory in its entirety. Most people in the Indian-controlled portion favour independence or a merger with Pakistan.

Nearly 70,000 people have been killed in the rebel uprising and a subsequent Indian military crackdown.

Rebel groups have largely been suppressed by Indian forces in recent years. However, public opposition to Indian rule remains deep and is now principally expressed through street protests marked by youths hurling stones at government forces. 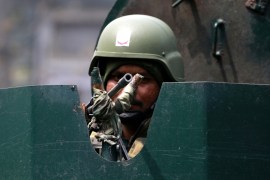