Indians are celebrating the 148th birth anniversary of Mahatma Gandhi, the leader of the South Asian nation’s independence.

He is remembered for his non-violent protests against British colonial rulers and his criticism of the country’s caste system.

Gandhi, who is known as the father of the nation, worked to liberate India while also bridging internal divisions. He was born on October 2, 1869.

The following quotes highlight Gandhi’s legacy of tolerance grounded in an expressed faith in human goodness:

“Peace will not come out of a clash of arms but out of justice lived and done by unarmed nations in the face of odds.”

“My religion teaches me to love all equally.”

“To be dissatisfied with the slowness of progress betrays ignorance of the way in which reform works.”

“Non-violence is the greatest force at the disposal of mankind. It is mightier than the mightiest weapon of destruction devised by the ingenuity of man.”

“The logical conclusion of self-sacrifice is that the individual sacrifices himself for the community, the community sacrifices himself itself for the district, the district for the province, the province for the nation, and the nation for the world. A drop torn from the ocean perishes without doing any good. If it remains a part of the ocean, it shares the glory of carrying on its bosom a fleet of mighty ships.”

“The world of tomorrow will be, must be, a society based on non-violence. That is the first law; out of it all other blessings will flow. It may seem a distant goal, an impractical Utopia. But it is not in the least unobtainable, since it can be worked for here and now.” 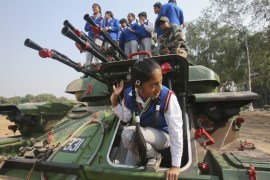 To be an Indian patriot it’s not enough to just love your country any more. 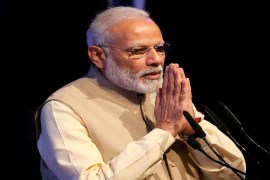 As the BJP government completes three years in office, Al Jazeera looks at the progress made so far.