Iran’s Foreign Minister Mohammad Javad Zarif will visit Qatar for talks on relations between the two countries that have caused tensions in the Gulf.

Zarif held talks with officials in Oman on Monday before heading to Doha on his first visit to Qatar since Saudi Arabia, Bahrain, the United Arab Emirates, and Egypt cut ties with Qatar in June.

The four countries accuse Qatar of backing “extremism” and fostering ties with their rival Iran, charges that Doha denies.

Speaking in Paris last week, the Qatari foreign minister said moves by Qatar’s rivals, including the cutting of trade and transport links, were actually pushing Doha into closer ties with Tehran.

“They accuse Qatar of being close to Iran but with their measure … they push Qatar towards Iran. They are giving Qatar like a gift to Iran,” he said.

Qatar said in August it was restoring full diplomatic relations with Iran. Doha along with other Sunni Arab Gulf states had pulled its ambassador from Tehran in January 2016 following attacks on Saudi diplomatic missions in Iran, spurred by Riyadh’s decision to execute a Shia scholar in the kingdom.

Oman, a tiny sultanate across the water from Iran, has traditionally had closer ties with Tehran than its neighbours and has maintained relations with Qatar throughout the crisis.

Zarif’s talks in Muscat covered “energy, the economy and transit” and the potential “transfer of Iranian gas through the Sultanate of Oman to India”, according to the official Oman News Agency.

Oman and Iran in 2014 agreed to build an underwater pipeline to pump Iranian gas to the Omani port city of Sohar. 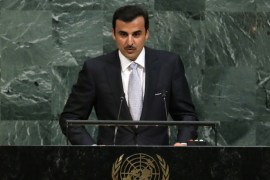 Qatar’s emir appeals to world leaders before meeting US President Trump on the sidelines of the UN General Assembly. 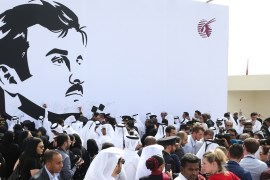