Turkey has set up its biggest overseas military base in the Somali capital, Mogadishu, increasing Ankara’s presence in the Horn of Africa country.

Officially opened on Saturday, the base, which reportedly cost $50m, will train 10,000 Somali troops and has the capacity to train at least 1,500 soldiers at a time, according to Turkish and Somali officials.

“This is the largest training base of its kind outside of Turkey,” Hulusi Akar, Turkey’s chief of General Staff, said at the ceremony.

“The government of Turkey and its army will provide all the needed support to our brothers in Somalia,” Akar said.

The base, spread over four square kilometres, has been under construction for the past two years.

“This academy is part of our commitment to rebuilding our army,” Somali Prime Minister Hassan Ali Khayre said at the inauguration ceremony.

Somalia has been at war since 1991, when clan-based militia groups overthrew the government of long-time leader Siad Barre before they turned on each other.

In the last decade, the western-backed government has been battling the al-Qaeda-linked rebel group, al-Shabab, which wants to impose a strict version of Islamic law.

Turkey is not the only country that has set up a military facility in the country.

The US has military bases in Somalia, although it has not publicly acknowledged their existence. One of the largest is at Balidogle airfield  – a former Somali Airforce base 110km northwest outside Mogadishu.

The United Arab Emirates is another country which has army presence. It runs one military facility in Mogadishu and has agreed to a deal with the breakaway region of Somaliland in the country’s north to establish a second.

Analysts say it is not surprising that many countries are establishing bases in the country of 11 million people.

“The strategic location of Somalia and its political impasse has made it an attractive location for foreign entities that have geopolitical interests in the region,” Hamza Egal, a Nairobi-based Somalia analyst, told Al Jazeera.

“Turkey has been a strong ally in Somalia’s state building, but it also seeks mutually lucrative interests with the fragile state,” Egal added.

Ankara has been increasing its foothold in the strategic country with President Recep Tayyip Erdogan visiting the horn of Africa country twice since 2011.

Turkey has built schools, hospitals and roads in the country and continues to send humanitarian aid to Somalia. 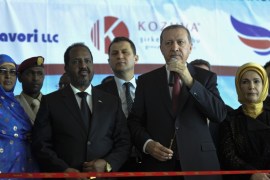 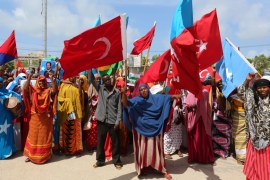 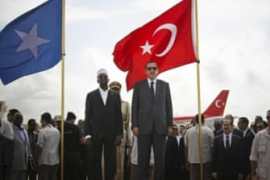 A recent attack on the Turkish mission in Mogadishu has worried diplomats and foreign students.