More than 13,000 civilians have fled Iraq’s Mosul over the past five days since government troops began the second phase in a battle to retake the city from the Islamic State of Iraq and the Levant (ISIL) last week, the United Nations has said.

“The average daily displacement numbers have increased by nearly 50 percent since military operations intensified, some 1,600 to more than 2,300 displaced per day,” UN spokesperson Stephane Dujarric said.

Iraqi troops, backed by US-led coalition air strikes, resumed their push to retake the northern city after a two-week lull in the operation. The military says it has taken back more than 60 percent of the city since the offensive began in October last year.

To date, nearly 130,000 out of 1.5 million Iraqis have been displaced from Mosul and its surrounding areas owing to the fighting, the spokesman added at a news briefing. Approximately 50,000 children have been affected by the conflict.

The UN refugee agency described the humanitarian situation as “dire” with food stockpiles dwindling and the price of staples spiralling, boreholes drying up or turning brackish from over-use and camps and emergency sites to the south and east reaching maximum capacity.

In a report published last week, the agency said as many as one million people are estimated to be out of reach of humanitarian assistance.

READ MORE: Iraq humanitarian crisis ‘one of the world’s worst’

The battle for Mosul, now in its 12th week, is the biggest Iraqi military operation since the 2003 US-led invasion.

ISIL, also known as ISIS, overran large areas in the north and west of Iraq in 2014, but Iraqi forces have since regained much of the territory they lost to the group.

Iraqi Prime Minister Haider al-Abadi had pledged that Mosul would be recaptured by the end of the year. That goal that is now out of reach as operations in western Mosul have yet to begin.

Stiff resistance by ISIL fighters, together with civilians trapped inside their houses and bad weather, have slowed advances in the offensive to recapture the city, the armed group’s last urban bastion in the country.

According to the UN, about 2.6 million Iraqis have fled the country since the beginning of the crisis.

Additionally, more than one million Iraqis fled between 2006 and 2008 owing to the sectarian war in Iraq, following the 2003 US-led invasion and occupation. 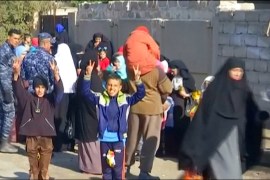