Fighting between Ukrainian troops and pro-Russia rebels in eastern Ukraine has escalated, with at least 13 civilians and fighters on both sides killed in the worst outbreak of violence in several weeks.

The warring sides were locked in heavy battles for a third day on Tuesday at the government-held town of Avdiivka, accusing each other of launching attacks and firing heavy artillery in violation of a two-year truce agreement.

The fighting damaged infrastructure and left thousands without water and electricity amid freezing conditions, with temperatures plunging to -20C at night.

As a result, authorities in the industrial town, in the region of Donbass, also known as Donetsk, declared a state of emergency.

“This is the worst fighting that has occurred in several months in eastern Ukraine.”

Kiev said eight Ukrainian troops were killed and 26 wounded since Moscow-backed rebels launched attacks on Sunday, marking the heaviest losses for the army since mid-December, according to government figures.

“The current escalation in Donbass is a clear indication of Russia’s continued blatant disregard of its commitments under the Minsk [ceasefire] agreements with a view of preventing the stabilisation of the situation and achieving any progress in the security and humanitarian spheres,” Ukraine’s foreign ministry said in a statement.

Yet, Dmitry Peskov, the Kremlin spokesman, accused Ukrainian government soldiers of launching a deadly attack on rebels across the Avdiivka frontline on Monday.

“Such aggressive actions, supported by the armed forces of Ukraine, undermine the aims and the task of realising the Minks accord,” Peskov said. He added that the attack aimed to distract attention from domestic problems in Ukraine.

France and Germany helped broker the Minsk accords with Moscow and Kiev, and European Union leaders tied implementation to a series of sanctions, including damaging economic restrictions, against Russia.

Fighting in eastern Ukraine has waxed and waned since then, with Brussels insisting repeatedly there can be no change to the sanctions regime until the accord sticks.

According to an AFP news agency report, the rebels shelled Avdiivka, a town of about 16,000 people, with repeated rounds of multiple rocket systems and artillery fire from early on Sunday morning.

“Right now, there is no power. We have not resolved problems with heating homes, and the gas pipe has been shattered,” local Ukrainian army unit spokeswoman Olena Mokrynchuk told AFP.

Freedon Vekua, the town’s military administrator, told AFP he was preparing for a possible evacuation of the town that sits just north of the rebels’ de facto capital of Donetsk because of the power outage.

“The issue of an evacuation has not been decided fully. We see it as our very last resort because there is still a chance of restoring heating,” said Vekua.

Ukrainian President Petro Poroshenko underscored the urgency of the situation by cutting short a visit to Berlin on Monday and convened an emergency meeting of his national security and defence council.

On Tuesday, European officials warned of a worsening humanitarian situation in Donbass and said the upsurge in fighting was an outright breach of the Minsk truce accords.

“The intense fighting around Avdiivka in the last few days, involving heavy shelling with proscribed weapons and leading to a considerable number of casualties, is a blatant violation of the ceasefire, as stipulated by the Minsk agreements,” the EU foreign affairs arm said in a statement.

“We call for the fighting to stop immediately … Full observance of the ceasefire is a crucial step towards the full implementation of the Minsk agreements, which is the basis for a peaceful and sustainable resolution of the conflict,” it said.

The conflict has killed nearly 10,000 people since 2014 – more than half of them civilians – and plunged Moscow’s relations with the West to a post-Cold War low.

The Kremlin denies backing the rebels and only admits that Russian “volunteers” and off-duty soldiers have entered the war zone of their own free will. 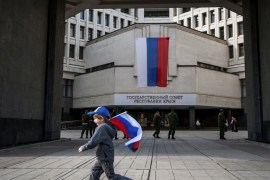 Russia to defend itself against charges it illegally annexed Crimea in suit seeking damages for shelling of civilians.