Soon after news broke that six Muslims had been killed in a shooting attack at a mosque in Canada’s Quebec City during evening prayers, people of all backgrounds took to  social media to express their solidarity.

Gunmen fired on about 50 people inside the Quebec Islamic Cultural Centre on Sunday at 8pm local time (01:00 GMT). At least eight people were also wounded in the incident.

In a series of posts, Twitter users denounced the attack against Muslims and offered condolences to the families of the victims.

Twitter user Gregory Brown described Sunday as a “sad day for Canada & the victims of this hateful act”.

“We must stand against racism and ‘other’ing, especially now,” he said in a post.

Mag Gardner, another Twitter user, urged her fellow citizens to stand together:

#saintefoy. Canada: together we must stand tall–no matter the background. True North strong and free.

Justin Trudeau,  Canada’s prime minister, condemned the shooting as a “terrorist attack on Muslims in a centre of worship and refuge”.

“Muslim Canadians are an important part of our national fabric, and these senseless acts have no place in our communities, cities and country,” he said in a statement .

While many in the North American country shared words of strength to each other via social media, others expressed concerns about Islamophobia in the country.

Our 4 y.o. at bedtime: "Dad, do we have to be Muslims in secret now?"
"No, love, #ACanadianIsACanadian."#SainteFoy mosque as she sleeps.

Trump’s move led to the detention of incoming refugees at US airports, sparking protests, legal challenges and widespread condemnation from international leaders, rights groups and activists.

And on Twitter, some users said Trump’s executive order – referred to by many on social media as “#MuslimBan” – prompted “xenophobia” beyond US borders.

Meanwhile in Canada, shooting in a mosque next to Quebec City. Thank you America 😡 for exporting your fear and xenophobia #SainteFoy 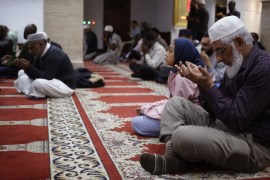 Muslim leaders call for calm and unity after mosques in Cape Town are defiled with pig blood and a pig’s snout. 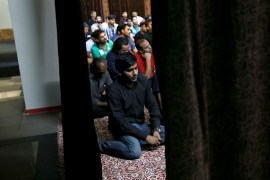 Muslims in Athens prepare for the city’s first mosque

Muslims in Greece hope that despite protests by the far-right, the government will stick to its plan to build a mosque.