A committee of UK parliamentarians plans to investigate a scandal surrounding an Israeli diplomat who was caught promising to “take down” Britain’s foreign office minister in an Al Jazeera investigation.

The parliament’s Foreign Affairs Select Committee intends to examine evidence that the Israeli embassy in London, through senior political officer Shai Masot, attempted to interfere in British politics in order to shape the country’s policy towards Israel-Palestine.

“The government may have formally closed the issue of Shai Masot, but we intend to look into the way foreign states seek to influence UK policy,” said committee chairman and Conservative MP Crispin Blunt, as reported by local media.

The Lobby also uncovered Israel’s extensive, well-financed propaganda campaign in the UK to counter negative news stories about its policies and to fund trips to Israel for young activists.

As part of the investigation, Robin, an undercover reporter using an alias, infiltrated a lobby of politicians, activists and Israeli embassy officials working to drum up support for Israel.

Many enjoyed financial or strategic support from the Israeli embassy in London via Masot.

In the wake of the investigation, Masot was forced to resign from Israel’s UK embassy, which subsequently attempted to distance itself from Masot’s actions and apologised to the UK.

Robin secretly filmed the moment at a London brasserie when Masot asked Maria Strizzolo, who was then chief of staff to MP Robert Halfon, the deputy chairman of the ruling Conservative Party: “Can I give you some MPs that I would suggest you take down?”

In response, Strizzolo said: “Well you know, if you look hard enough I’m sure that there is something that they’re trying to hide.”

“Yeah. I have some MPs,” Masot replies.

“[Strizzolo] knows which MPs I want to take down … The Deputy Foreign Minister.”

Masot was referring to Duncan.

Duncan said in 2014 that, while he fully supports Israel’s right to exist, he believes settlements on occupied Palestinian land represent an “ever-deepening stain on the face of the globe”. He also likened the situation in Hebron in the occupied West Bank to apartheid.

At the same dinner table conversation, Masot described British Foreign Secretary Boris Johnson, Duncan’s boss, as an “idiot … without any kind of responsibilities”, while Strizzolo said he was “solid on Israel”.

Earlier this month, Jeremy Corbyn, the leader of the opposition Labour Party, called for an inquiry into Masot’s activities.

In an open letter to Prime Minister Theresa May, Corbyn described the actions of Masot as “improper interference in this country’s democratic process”.

Explaining that he was “concerned” by Johnson’s announcement that the embassy’s activities were a closed matter, Corbyn urged May to launch an inquiry: “This is clearly a national security issue.”

Supporters of Corbyn, who is a leftist with a long history of Palestinian solidarity activism, were among those accused of anti-Semitism by Israeli officials, as Al Jazeera’s investigation documented.

All four parts of “The Lobby” are available to watch online. 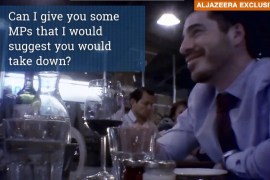 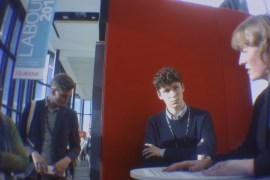 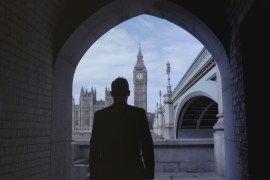